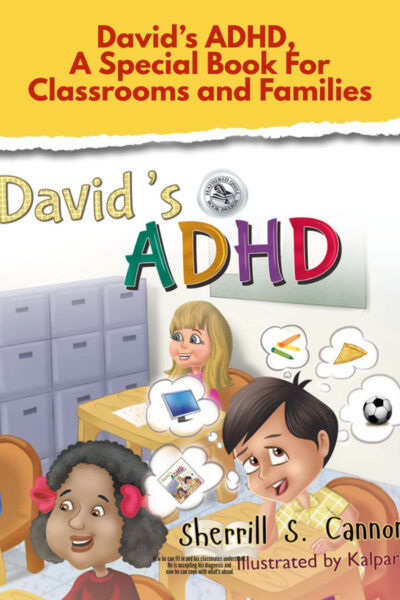 I know it was said that Sherrill S. Cannon had stopped writing children’s books…but she’s back with one more; David’s ADHD, to make her children’s collection an even 10.

We’d like to thank Sherrill for sending us a copy of her latest book, for mentioning me in her Acknowledgements and Thanks, and most of all for becoming a friend and inspiration to our family, over the past 8 years.

David asked Sherrill to write a book for people like him; children with ADHD, and that’s how David’s ADHD came to being. Sharing classroom space with someone who has ADHD can no doubt be trying for all of the people in the room, and this book may help shed some light on it.

I like Sherrill’s description of David having a camera in his head that was connected differently to those of his classmates. His behaviour and inattentiveness and aggression increased each year.

It’s made clear that his parents and family love him dearly, but know that something isn’t right. A doctor diagnoses ADHD and explains:

That some children lacked a certain dimention;

ADHD meant they could not pay attention.

A small lazy link somewhere in the head.

A sleepy connection that wasn’t so good;

It didn’t use sugar the way that it should.

A behaviour plan and new schedule at home and at school was implemented and rewards for good behaviour were won. New ways of doing his schoolwork that allowed him to shine. And time to get his energy spent.

Now he can fit in and his classmates understand. He is accepting his diagnosis and now he can cope with what’s ahead.

David was right; there aren’t enough books made for children on this topic. ADHD is diagnosed much more frequently than in the past, and there are also more ways of building in coping mechanisms and adjusting the course of the day so as to minimise its impact for all. It does take a lot of work, and different things work for different people and may change over time.

David’s ADHD is For Everyone

Children who have ADHD will enjoy David’s ADHD because it explains things in easy language and makes them feel that they aren’t alone in the world. Children who know others with ADHD will be better able to understand their behaviours and hopefully become more understanding of those around them.

Kalpart has once again done the illustrations so that the look of the book is consistent with Sherrill’s other books. And children will be able to spot some of the same characters, as well as search for other book covers that are scattered throughout as part of the illustrations. After you’ve read a couple of Sherrill’s books, the characters will feel like family and you’ll be addicted to the rhyme and morals included in each story.

Sherrill S. Cannon has gained a great following over the years (and she’s won nearly 80 awards to date). She’s a retired teacher with several grandchildren so knows what it’s like from both perspectives, which gives her stories a lovely balance, and they’re told from the child’s perspective so they feel like they’re right in the middle of it, which makes it appeal to everyone.

Don’t forget to have a look into Sherrill’s other books: