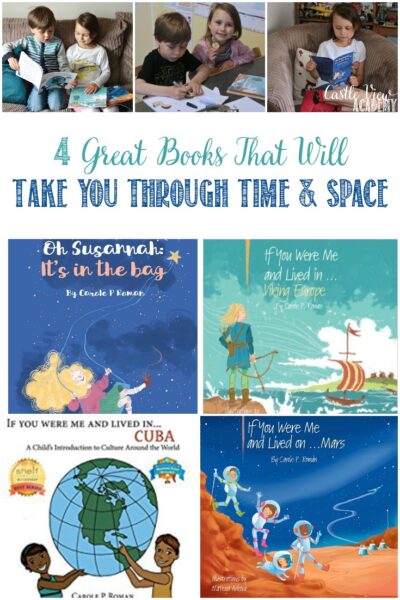 We really enjoy reading books by Carole P. Roman, such as the titles we shared with you last year.  We are pleased to be able to share our reviews about another 4 titles this year.  From Viking times to a future on Mars, let’s learn about how people live their lives, and what our life might be like in a different time or place.  Carole P. Roman generously sent four books out to us to read: If You Were Me and Lived in… Viking Europe, If You Were Me and Lived in…Cuba, If You Were Me and Lived on…Mars, and Oh Susannah:  It’s in the Bag.   We knew ahead of time two of the titles, but two were surprises for us to learn about when we opened our package, and they were also timely to events going on in our lives. 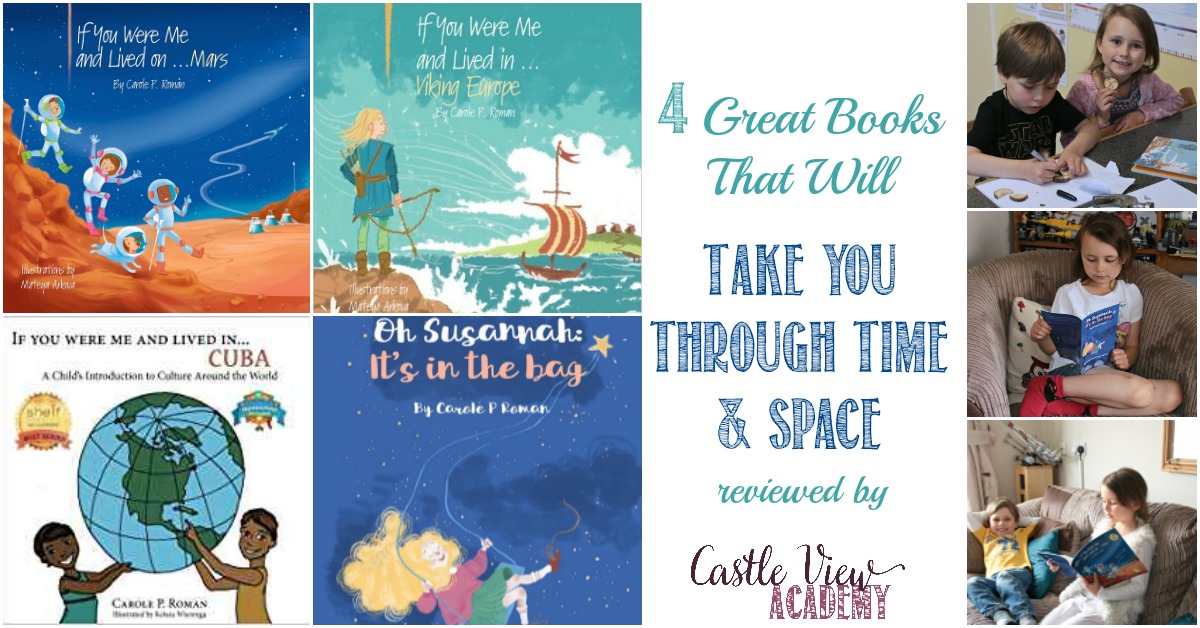 If You Were Me and Lived in…Cuba 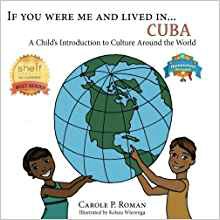 If You Were Me and Lived in…Cuba was quite interesting because we don’t know very much about Cuba.  It’s so close to the USA and Canada, yet it’s all a bit mysterious.  A friend of mine has been there and I’ve seen the beautiful photographs on Facebook; but what is it like to grow up in Cuba, away from the resorts?

Follow along by finding out what your name might be if you were there, foods you would eat, and learn how sporting is ingrained in the culture, right from the time you were an infant.

There are words sprinkled throughout in Spanish, and you should be able to infer what most of them mean from their context, but there’s a handy glossary at the back if you need a little help.

My children especially liked the pictures that were from real photographs with the illustrated characters superimposed over them.  That is a great way to combine a fictional family within the realm of reality. 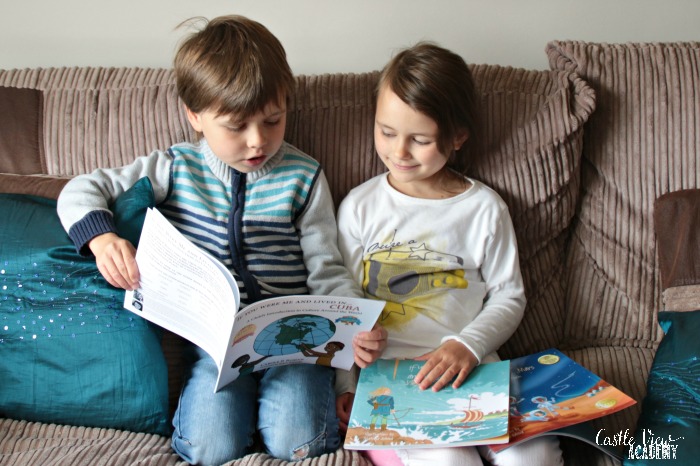 The way this book is structured, it gives lots of information in a storytelling manor, while at the same time asking lots of questions to the reader to encourage them to think about what they’re reading, and how their own lives compare and contrast to lives in Cuba.

We do hope that the recent hurricanes will not alter Cuba’s beautiful architecture and landscape have not been lost permanently.

If You Were Me and Lived in… Viking Europe 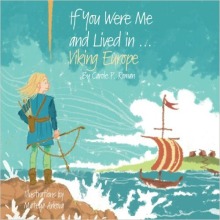 Since going to a Viking Festival earlier this year, my children have been wanting to learn more!  We’re unexpectedly putting together a unit study on Vikings, and this book is the first piece to it.  If You Were Me and Lived in… Viking Europe  is on the longer side of Carole’s books at 68 pages (plus the handy glossary).

We read this book together over a couple of sittings while also watching a BBC series about Vikings and the kids could see the same names being used, as well as other similarities, which really meant the two complimented each other well and they had fun spotting the similarities and the information stayed with them.

In Viking Europe children learn about what the name means, what a Viking town looked like, and what their merchant father would have traded and brought back (such as salt from an area about 8 miles from where we live), and how the three classes of citizen were treated.  The children discovered that they eat many of the same foods as Vikings, but that marriages amongst Vikings is very different from current culture.

Tristan loved the final pages when some of the Norse Gods are introduced…of course, he was quick to pick up on the fact that some of these names and characters are used in the superhero shows he watches.  And he was excited to know that they were ‘real’ characters, if only in mythology.  Little connections like that do help children retain more information and take some of the mystery out of other areas of life.

I was thankful for the the pronunciation help that was offered in parentheses during the story so that I could pronounce things as close as possible to how they are meant to be. 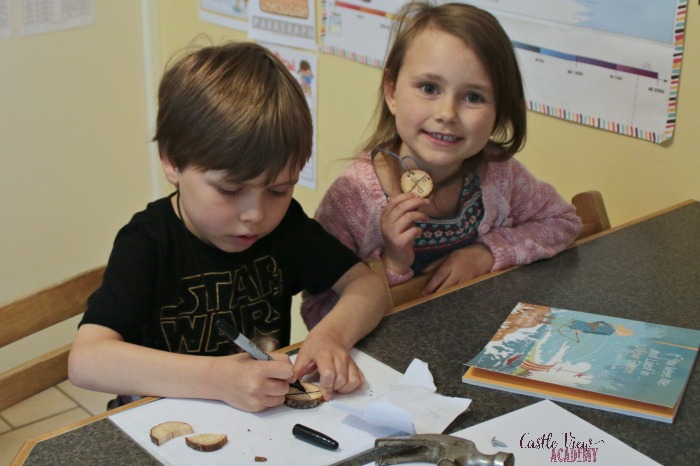 We were inspired to make a Viking necklace craft and looked up some symbols and their meanings for the children to choose their own designs.  It’s always fun to create physical memory of a book!

If You Were Me and Lived on…Mars 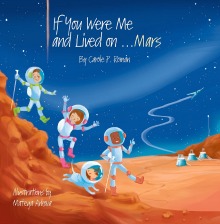 The majority of the Carole P. Roman books we’ve read have been in the If You Were Me and Lived in… series, which has taken us to some wonderful places around the world and periods of time.  If You Were Me and Lived on…Mars is a little different as it takes us away from Earth and into outer space to Mars.  Rather than looking into the past, we’re travelling into the future!

Buckle up for the trip in 2054; when a ‘quick trip’ to Mars would take about 3 years.  About 6 months to travel there, then a two year wait for the next window when the planets line up just right again for your departure back to earth.  While you’re there, you will learn about the climate and atmosphere of the red planet, as well as how you will grow your own crops to survive.

Particularly interesting in this book is the information given about the names of the moons of Mars and how they received their names.  Phobos and Deimos; Fear and Panic. 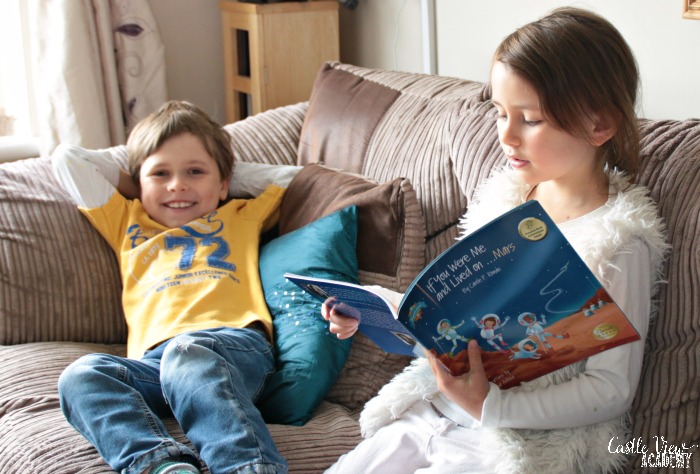 And again, this book fits in with a BBC series we’re watching that has twelve UK citizens competing for a recommendation from Chris Hadfield for the next selection round of Astronauts.  My children are learning the skills they will need to pass the tests for space flight..and dreaming big for a trip to Mars.

Oh Susannah:  It’s in the Bag

Oh Susannah:  It’s in the Bag 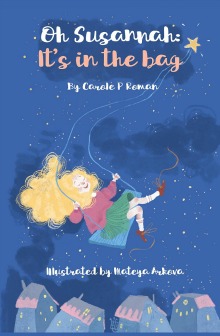 was a timely book for the whole family.  Due to one thing or another most of us have fallen behind in one area or another.  And it’s a rotten feeling, there’s no doubt about that.  In this beginner’s chapter book you follow Susannah around as she shuffles through a day where the work she hasn’t completed previously has caught up to her.  As she drops each item in her bag (both metaphorically and literally), her backpack of unfinished business becomes heavier and more of a burden until it finally bursts at the seams.

That evening she has a terrible nightmare that wakes her up screaming and her parents rush in, wondering what’s wrong.  Together, they work out why things have piled up for Susannah and how together they can help Susannah to make her load less cumbersome in the future (after tidying up the mess that rotten banana left in her schoolbag and over her papers).

Kallista (7) has been re-reading this book on her own, and says,

I love it. I love it so very much!

After reading this book we all had a talk together about the importance of not letting things build up; do your work in a timely manner and don’t try to hide your troubles or they’ll catch up with you.  It’s better to deal with them at the time and to talk to people about them. 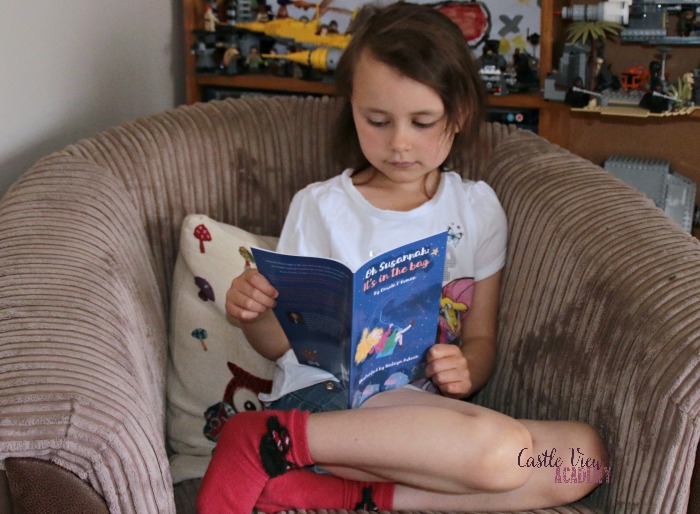 Reading this book gave us all some motivation to work hard and complete our current projects so we can then have some time together to enjoy each other’s company and do the things we really love.  And maybe even work ahead a little, too!

Isn’t it interesting how each of these book choices have worked out so well for us?  Each book has corresponded with something that my children are interested in or have had some experience with.  Of course, Carole P. Roman has dozens of books and I’m sure you can find books for your children that would also be a great fit for them. 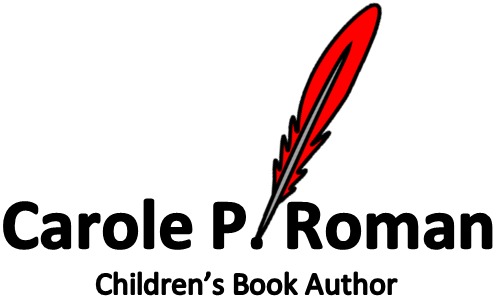