Home » Culture » Europe » Discovering C.S. Lewis Square in Belfast (The Lion, the Witch and the Wardrobe) 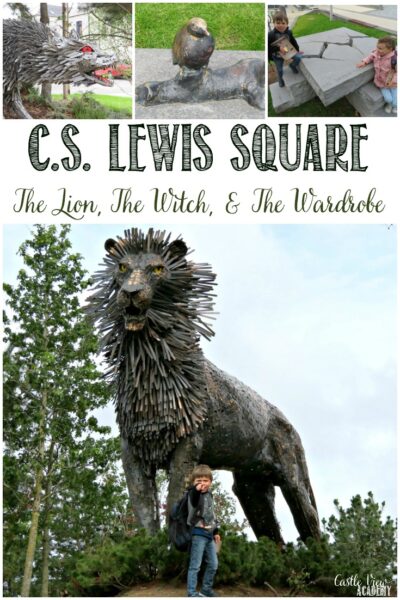 We were recently in East Belfast for a Tiny Life meeting. We are working on a new project and had the pleasure to see their new premises at Hollywood Arches. The meeting was scheduled from 10:30 to noon so we took the opportunity of being in a new area to pack a picnic lunch and do some exploring of the C.S. Lewis Square. And if you’re in the area this month, don’t miss the C.S. Lewis Festival! 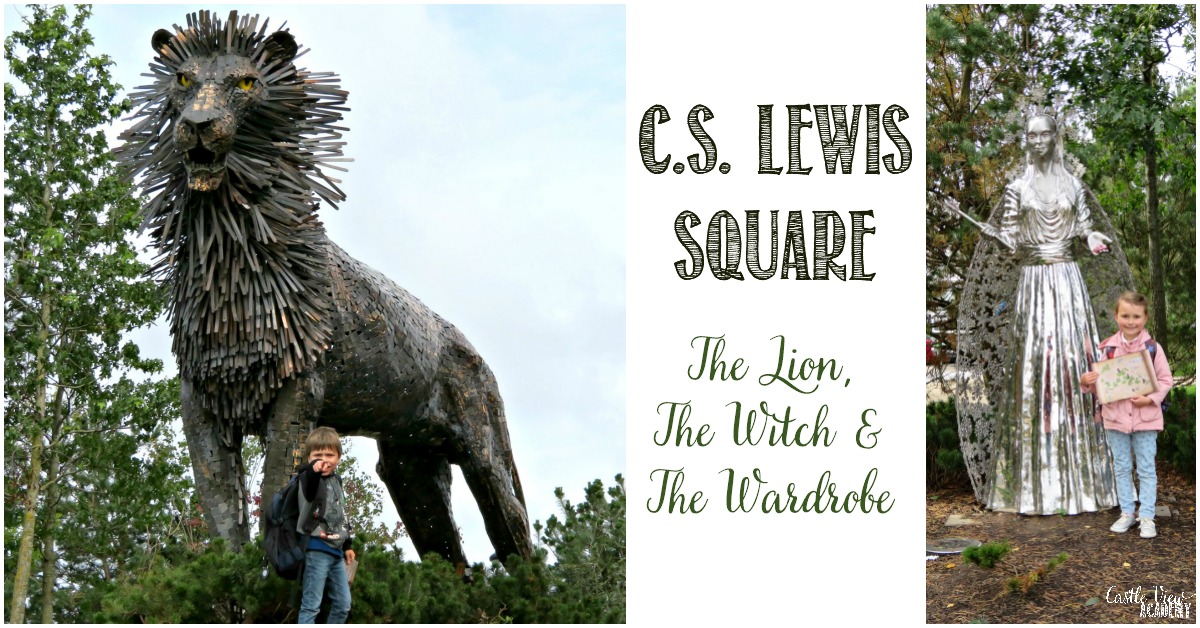 C.S. Lewis Square was officially opened last November and it has been on my list of places to visit with the children. This was the day! As it turns out the square is just across the road and behind the Eastside Visitor Centre.

If you are not familiar with C.S. Lewis, you may recognise that he is the author of The Lion, The Witch And The Wardrobe and East Belfast is his old stomping ground. 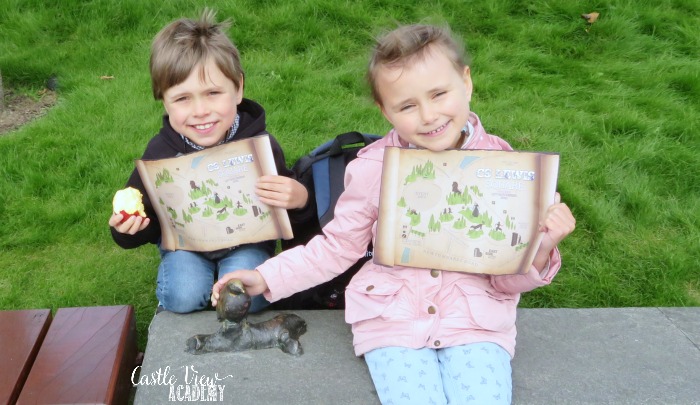 We stopped in at the Eastside Visitor Centre to have a little look around and found that the mother of the lad working there was also from Canada; it’s a small world.  So he had something in common with the kids – living in a house with a Canadian mom.  He gave the children each a map to the Square, which isn’t actually a square at all.  There is a round area of concrete where we sat eating next to the little robin. Then there is a little cement trail/sidewalk amongst hills and areas of grass and trees behind the buildings and leading to another street. This is where you find the other Sculptures.

The Lion, the Witch and the Wardrobe Sculptures 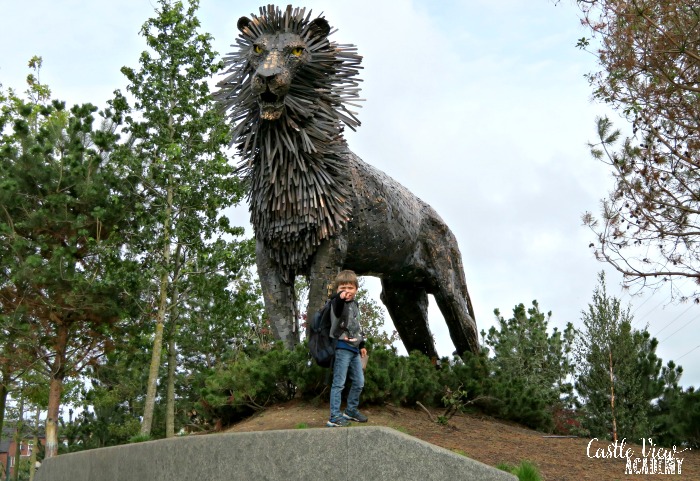 Aslan, The Great Lion, is tall and proud on the highest hill.

The map showed the locations of the sculptures and you can turn it over for a little information about each one as well as quotes from the book. 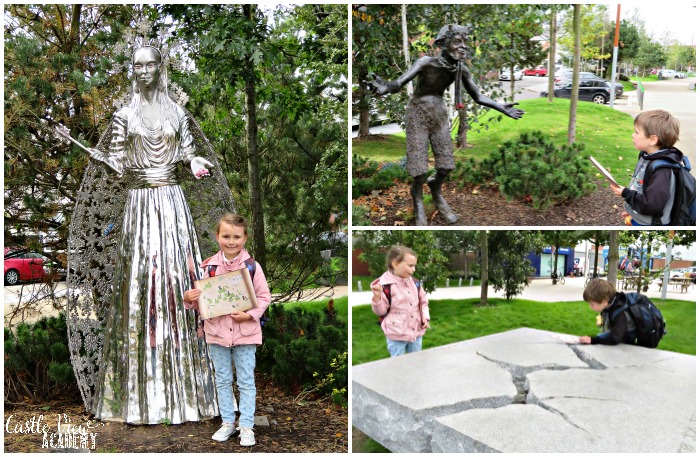 The statue of the White Witch was Kallista’s favourite sculpture and she wanted her photograph taken beside it.

Mr. Tumnus, who is half human and half goat is an odd character.  Tristan was reading more about him from his map.

The Stone Table is held up on short pillars and has some ‘ancient’ writing carved into it, which warranted a closer inspection. 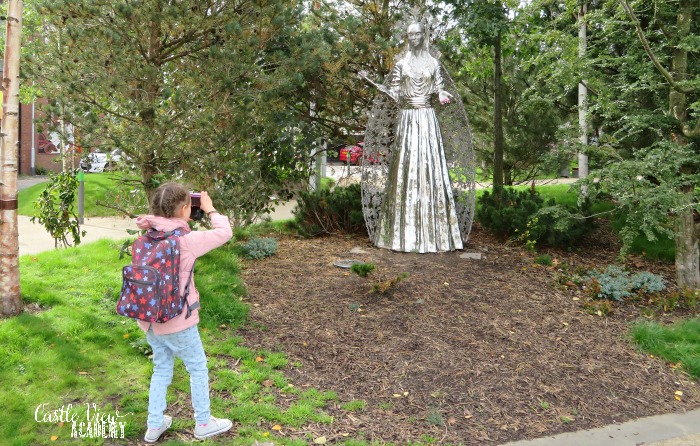 Kallista also wanted to take her own picture of the White Witch; never without her camera when we go on adventures, she was prepared. 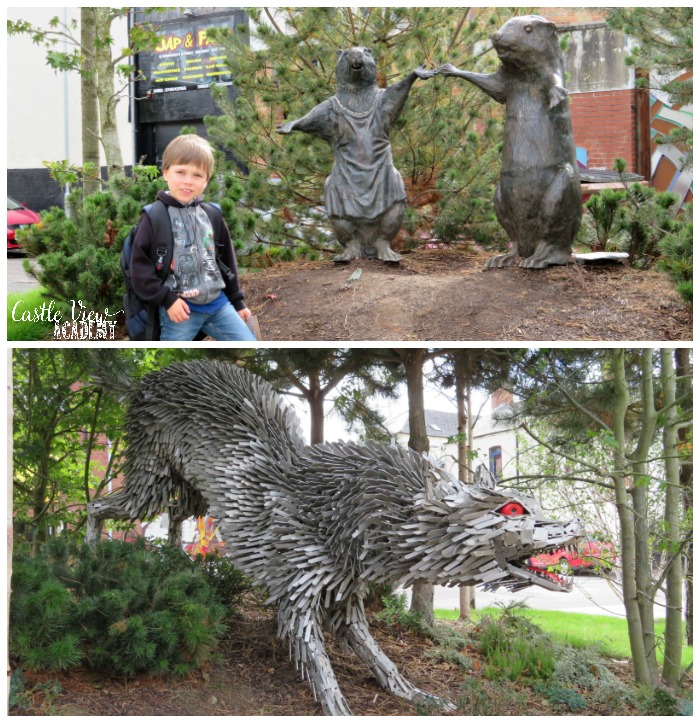 The first sculpture we came across was Mr. & Mrs Beaver, who take care of the children when they arrive in Narnia, which was a fitting start to our exploration of C.S. Lewis Square.

Maugrim, the ferocious talking wolf acts the part with his spiky fur, red eyes, and tongue.  Kallista was a little afraid of him, while Tristan noticed how his eyes stood out so well. 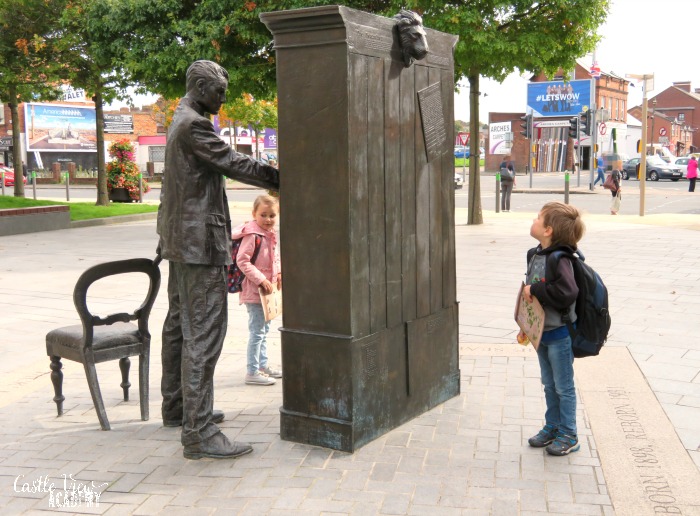 The trail ended for us at The Searcher, the wardrobe sculpture next to the library.  As you can see, there are little inscriptions written here and there on the statue, as well as on the pavement around it.

Inside the library is a sculpture, a papier-mâché of Aslan, and a display about C.S. Lewis and of course some of his books to borrow.

It was a lovely little area, tucked away and yet so close to major roads and businesses.

Next time we’re in the area we will be doing more exploring, weather permitting, and will walk the Yardmen Trail to the Titanic Quarter.  So tuning next year for that!

Tristan has now borrowed The Lion, The Witch, and The Wardrobe book from the library and is now reading it. Following which we will watch the movie together, in the same fashion as we’ve been watching the Harry Potter series.

And in true fashion, he’s even turned his map (which is available at the Eastside Visitor Centre and the nearby library, into a scroll.