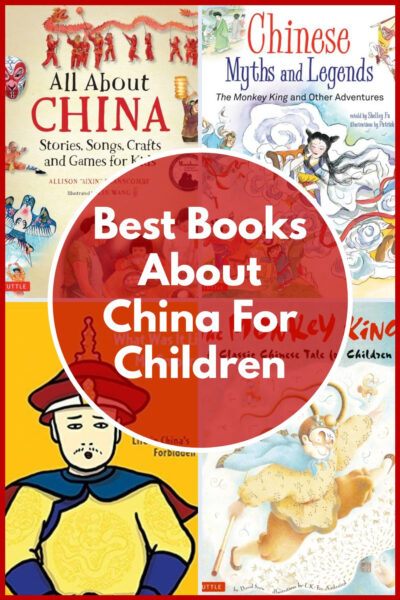 There are many things children love about reading. One of the most exciting is exploring a new place. We use books to share the history of a place and learn about the culture. This is especially useful when we are not able to travel or visit friends abroad. China is one of the most beautiful places in the world, so it’s no surprise that it has a rich history and culture that you can explore through the books. You’ll find some great books about China here.

If you’d like to introduce your children to the myths and legends of China, this book is a good way to go, particularly if your ‘little readers’ aren’t the littlest anymore.  Add it to your cultural collection of world myths and see how these stories compare to similar ones from other cultures.

The Monkey King: A Classic Chinese Tale For Children

A story set a long time ago when there was much disorder in China.  The Jade Emperor of the Heavens was tempted to destroy the inhabitants but Guan Yin, the Goddess of Mercy talked him out of that and into bringing the scriptures of Buddha from India for the people to learn about peace and kindness.

Chinese food is popular throughout the world, with many people going out to eat or getting a take-away meal on a weekend or for a special occasion.  This is nice but it is very pricey, so why not invest in a Chinese cookbook instead?

The story is about young Ming.  Today is a special day for him as his father is taking him to visit the China’s Great Wall outside of Beijing.  The pair become separated at the wall and Ming is magically transported back through time and has his own guide, the General, to show him important points in time for the Great Wall.

There weren’t any phones or television to document history, so what was life like for the emperor of China; a mysterious life behind the walls of the Forbidden City?  Children will get a small glimpse into this life in the book, What Was It Like, Mr. Emperor? Life in China’s Forbidden City.

In The Forbidden City

The pages In The Forbidden City fold out 2 or 3 ( or 5!) times to present panoramic sketches of the City full of tiny little details!  But don’t worry, there is also a handy magnifying glass (made of plastic for safety) at the back of the book, which lives in a pocket.

My First Book of Chinese Words

ABCs are one of the first thing young children are taught, and they may be surprised to learn that each language is different; they may not use the Roman alphabet, and certain English letters or sounds may not even be present in another language!

All About China: Stories, Songs, crafts and Games for Kids

All About China is in keeping with Tuttle’s ‘All About’ series, which is incredibly informative.  Take a little trip into the past and learn a little about several of the dynasties and some fun facts about them.

Bamboo and Me: Exploring Bamboo’s Many Uses in Daily Life

In Bamboo and Me, the young narrator has a dream where one spring a big red fish told him to go into the bamboo forest to find a present.  Over the course of the next year, the narrator goes into the forest with his family on many occasions to gather bamboo for baskets, fans, shoots for meals, for making water troughs, and many more items…but the narrator was still looking for his present…

Within this book there are seven stories over 65 pages from 6 Asian countries. These are folktales so of course they are popular, but it’s also very interesting to see the different illustrations and little different versions and variations of the stories. Everybody has a version of a story and may embellish one area of it over another. It’s a bit like how rumours can start with details changing over time and with each telling.  This can be an interesting discussion to have with your children.

The next time your children are bored, instead of just telling them to go fly a kite, tell them to build their own kite, first and they’ll learn new skills and culture along the way, too!