Things are usually pretty quiet in our village, but there was lots of activity last weekend when we discovered that Bollywood had come to town!  They were filming for a movie called ‘One Nenokkadine’ 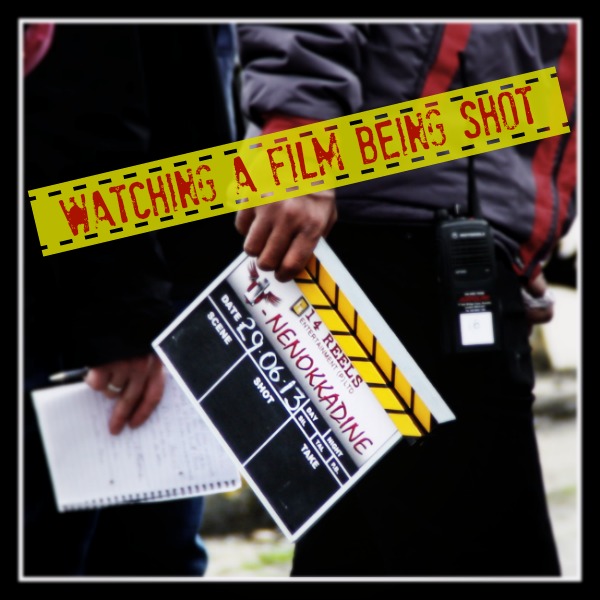 I thought this could be a good learning opportunity for the children to see how a film was made and they were itching to go out for a walk so we organised ourselves and wandered down to the seafront where we usually go to feed the birds to see what we could see.

The most obvious thing was the addition of 2 Easter Island like statues that had been placed along the sidewalk, complete with bits of grass placed around them to make them look as if they’d been there for years.  There was also a black tent set up in one of the parking lots, several large haulage trucks and lots of people milling about.  A fine gentleman by the name of Errol stopped to chat with us.  He is from the Caribbean, but enjoying his time in Northern Ireland filming.  He had a great personality and had some stories to tell about his grandchildren and his visit to Toronto a few years back.  He even introduced us to one of the actors as he was walking past! 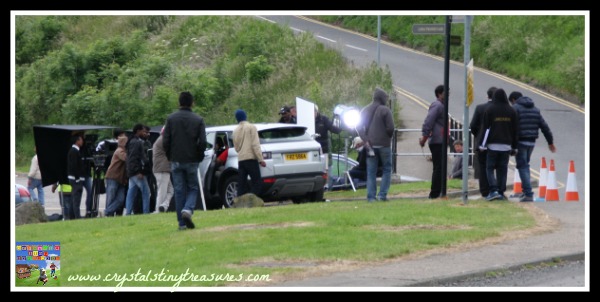 We found a vantage point a good distance away in the upper car park so that we would be sure not to get in the way.  We sat on a wall and observed everything that was going on around us.  There were a few big moving-house type trucks up near us that held some of the props and equipment and we were able to see them build a structure around a truck so that someone could stand in front for filming.  This was perhaps for the crash scene I’d heard was to be filmed on this day, but it must have been after we’d left.  There was a team paramedic and security so we were able to talk about the important jobs they had of protecting the crew and equipment.  They were just finishing lunch when we arrived, so we chatted about catering as well.  We talked about the director, writers, actors, location scouts, drivers, cameramen, admin people, etc.  I thought it was important for the children to learn that there are many, many people involved in all sorts of areas working together to create a film.  Here you can see the famous Bollywood actor, Mahesh Babu going for a stroll.

The ‘action’ was done in only short bursts with up to an hour between.  There was lots of unseen prep work to be done just to film 10-20 seconds.  We saw a car drive forward about 3 feet, stopping directly in front of a cameraman only inches away.  Then it would back up and do it all again.  This is when we decided it would be best to leave as the children were becoming hungry.  I asked which way was best to leave by and we were told it was fine to go up the hill, we’d know if there was trouble if there were panicky faces on everyone!  We only went about 20 feet when we were asked to stop for the next scene, then we were told, along with the security guard to move out of the way as we were just inside the shot-there goes our Bollywood debut!  This was fine as it meant we were closer to the action and could see and hear more of what was happening. 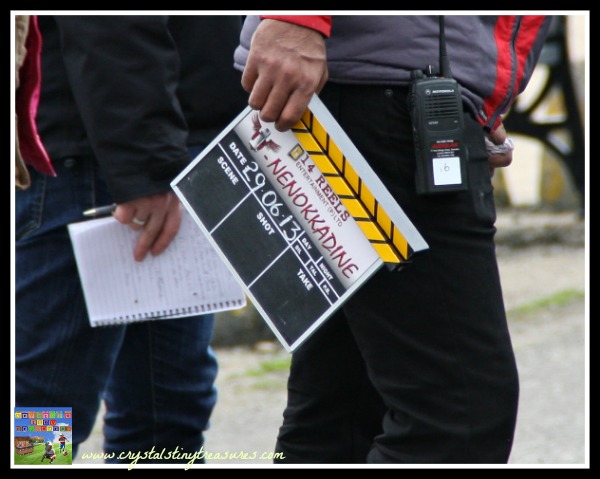 We were close enough to hear them say ‘rolling…action!’  and see the clapboard.  Pretty cool.  Once it was safe for us to continue on our way up the hill, we were able to look down and see them filming another scene using a green background.  A little difficult to explain how it works to children of 3 &  5, but I’m sure we can bring it up in the future and they will remember back and understand how it is used.

When we arrived home we found India and the Caribbean on the kitchen wall map.  We are waiting on a postcard coming from India, so that will tie in nicely.  No one can say there’s nothing exciting going on here;  the world is coming to our doorstep!  And if all the star-spotting has made you hungry, stay in the theme and make Bombay Baked Potatoes, or try a camera-themed snack.

READ MORE:   Adventures In Asian Art: An Afternoon At The Museum

By request, more photos from this movie shoot can be found by clicking here.  Or see our Multicultural Activities for Kids page where you’ll find all of our multicultural ideas in one place.