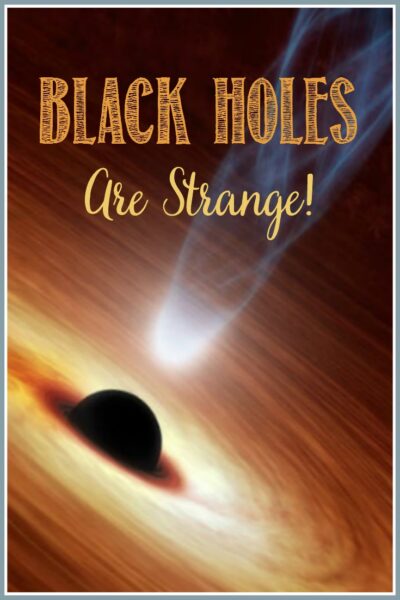 I’d like to thank Spaceman Neil for submitting this week’s guest post about one of his favourite topics; black holes!  Such mysterious and fascinating entities they are!

There are a lot of wacky things in the universe, but ask any scientist and they will probably agree that black holes are among the strangest. These spectacular collections of mass have gravity so strong that nothing can escape, not even light! Although there are still a lot of unknowns, astronauts like Neil are constantly learning about their properties and structures.

It’s too bad there aren’t any amusement parks or beaches near black holes because clocks run really slow near them. That means, for example, if your mom said, “We are leaving in 5 minutes!” you’d have enough time to ride your favorite carousel at least 10 more times. Although it’s not really time travel like in the movies, it’s very similar. Black holes have a boundary called the event horizon where gravity is just strong enough to drag light back and prevent it from escaping. And, since nothing travels faster than light, everything else gets slower too.

A whopping 1,600 light years away to be exact. A light-year is the distance that light travels in a vacuum in one Julian year (365.25 days). So, just like when you’re on a road trip to your grandparents’ house and you can’t imagine spending any more time cramped in the backseat next to your brother so you try to convert miles into minutes, you can roughly calculate the distance to time ratio for 1,600 light years as approximately 1,600 years.

As tough as stars can be, their cores can collapse and break off into millions of pieces. Black holes form in the gravitational collapse of massive spinning stars. Each black hole spins at different speeds but some of them have been clocked such as the black hole at the heart of galaxy NGC 1365. This particular black hole turns at 84% of the speed of light. At least it won’t get a ticket for going over the cosmic speed limit!

There’s no denying things get peculiar as they near black holes since black holes have the capacity to distort space itself. As the black holes continue to spin, that distortion gets distorted into an infinite worsening of distortions. It would be like playing a game of telephone with all your friends under water.

I hope you’ve enjoyed learning all about black holes. See? They aren’t as creepy as science fiction movies and books make them out to be – in fact, they are pretty cool! Sure, they can be destructive, but scientists are working to harness the power of black holes for really neat things like energy and space travel. Who knows, maybe one day your whole family will be able to take a trip to the moon thanks to the power of a black hole! If you do, you’ve got to try the freeze-dried ice cream, it’s delicious.

Until then, I’ll keep sending updates from up here!

Hi! I’m your pulsar penpal, Astronaut Neil. My trusty Robot Sally and I traverse the universe, learning about celestial bodies and astrophysical phenomena. There’s some pretty cool stuff happening out here in space! Sally and I want to share our findings and transmit pics to our friends on Earth. We can’t wait to send you our next letter.