Last weekend was the Big Garden Birdwatch.  Across the United Kingdom, nature-loving folk took 15 minutes to count how many birds of each species they could see/hear.  They could do this either in their own back gardens or in a park or other place as well.  On Sunday morning we gathered ourselves together to go see some bird ringing. 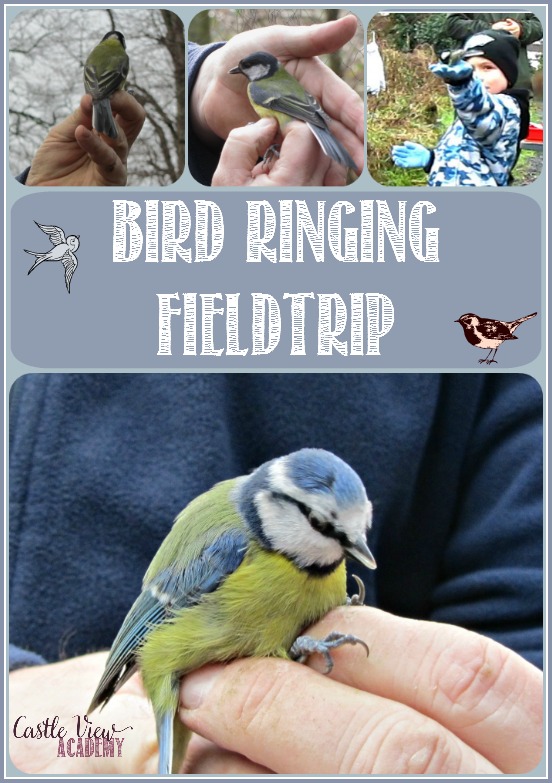 I’d only ever seen bird ringing on TV before, never in person, so I thought it might be fun for the family to learn more about it.  The weather was supposed to be rainy, but we were fortunate that it didn’t start to rain until just the very end of the day.

When we arrived at the woods, there was a table set up and the ringing was already under way.  We saw several white cloth bags hanging from the bushes, and there were birds inside, gently wiggling.  These were birds that had already been caught in the mist nets that had been set up early that morning.  They were then untangled and gently placed in the bags until they were ringed. 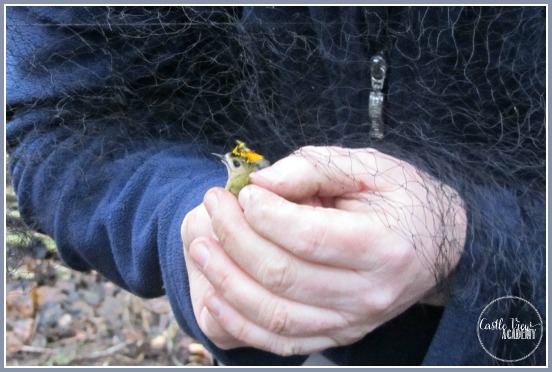 The ringing process is quick and gentle so as not to stress the birds unduly.  If a bird is too stressed, or has become too cold in a bag, then it is released without being ringed.  I liked knowing that the birds’ best interest were being looked after.

Each bird species has a particular size of ring that is used so that the light aluminum ring will fit correctly.  A ring is taken off of the cord, then put into the clamp (it looks similar to wire-strippers) and then the ring is placed around the bird’s leg and clamped securely into place. 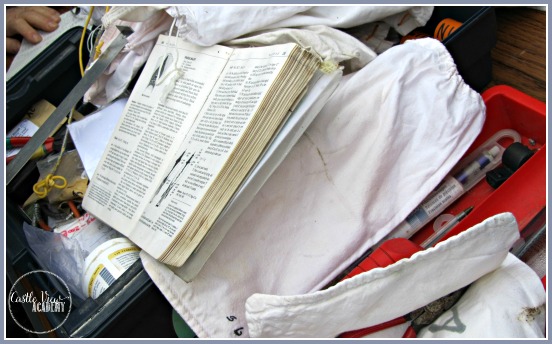 The tag number is recorded in a book along with the date, location, bird species, and wing size.  If it’s known, the gender and age of the bird is also recorded.

Most of the birds ringed on this day were great tits and blue tits, and coal tits, and also ringed were gold crests, chaffinch, dunnock, and wren.  Earlier a sparrow hawk had been spotted as well.

The ringer thought that the great number of great tits was very unusual, and he wondered if they were part of an influx from Russia.  If only those birds could talk!

For great tits, the way to tell the genders apart is by how much black they have on their underside.  Males have more black feathers there than females.  And you can tell if a blue tit is in it’s first year if it still has a ‘nest feather’ on its wing.  It’s just a very small sharp-looking feather that is still a little green in colour compared to the rest of the blue feathers. 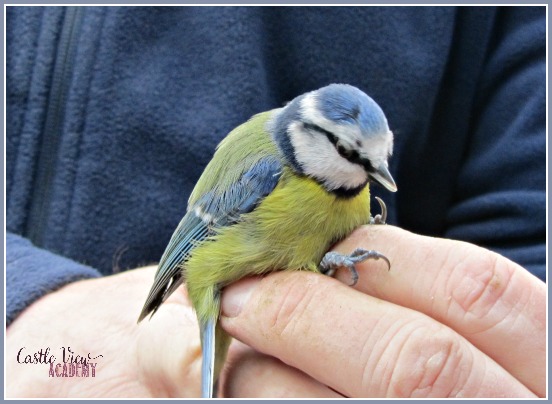 After the birds were ringed, they were released back into the woods.  We were each given the chance to release one – how exciting!  Kallista chose not to, and Tristan was a little unsure, but after he saw someone else do it, he was willing to try.  He kept his gloves on, and a blue tit was placed on his hand which was then expected to take off into flight.  However, this little fella just sat on Tristan’s palm and looked around first before flying off into a nearby tree! 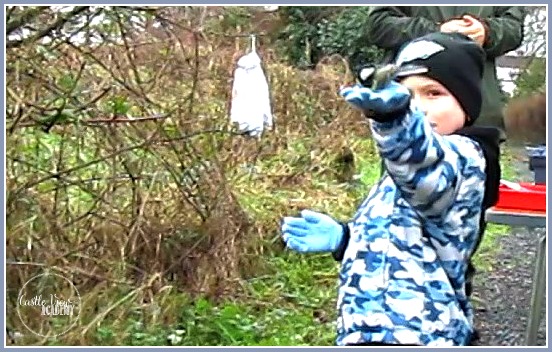 Phil and I took a bird each into our own hands after being given instructions on just how to hold them so that they aren’t injured, yet are held firmly.  The bird felt so light, fragile, and soft.  It was a magical moment to release a little life back into nature.

The rings will help people learn more about the birds.  When another birder spots a bird with a ring, they can try to read the number from the ring and report it.  Then they will be able to find out where the bird was ringed, perhaps how old it is, and how far it has travelled.  By doing this, migration patterns can be followed, populations can be assessed, and more can be learned about birds to help protect them in the future.

We’d only planned to drop by briefly, but we enjoyed ourselves so much we stayed right to the end and enjoyed a cup of tea and cookies with everyone indoors.  We’ll be looking out for more events like this one in the future.

If you have a beginner birder under your wing, you may enjoy our post on bird watching from the kitchen window.

I’ve created a free garden birds 3-part card set for you, with the help of Maurice Baker.  I’d highly recommend you visit his site for great wildlife photos, videos, and audio recordings! 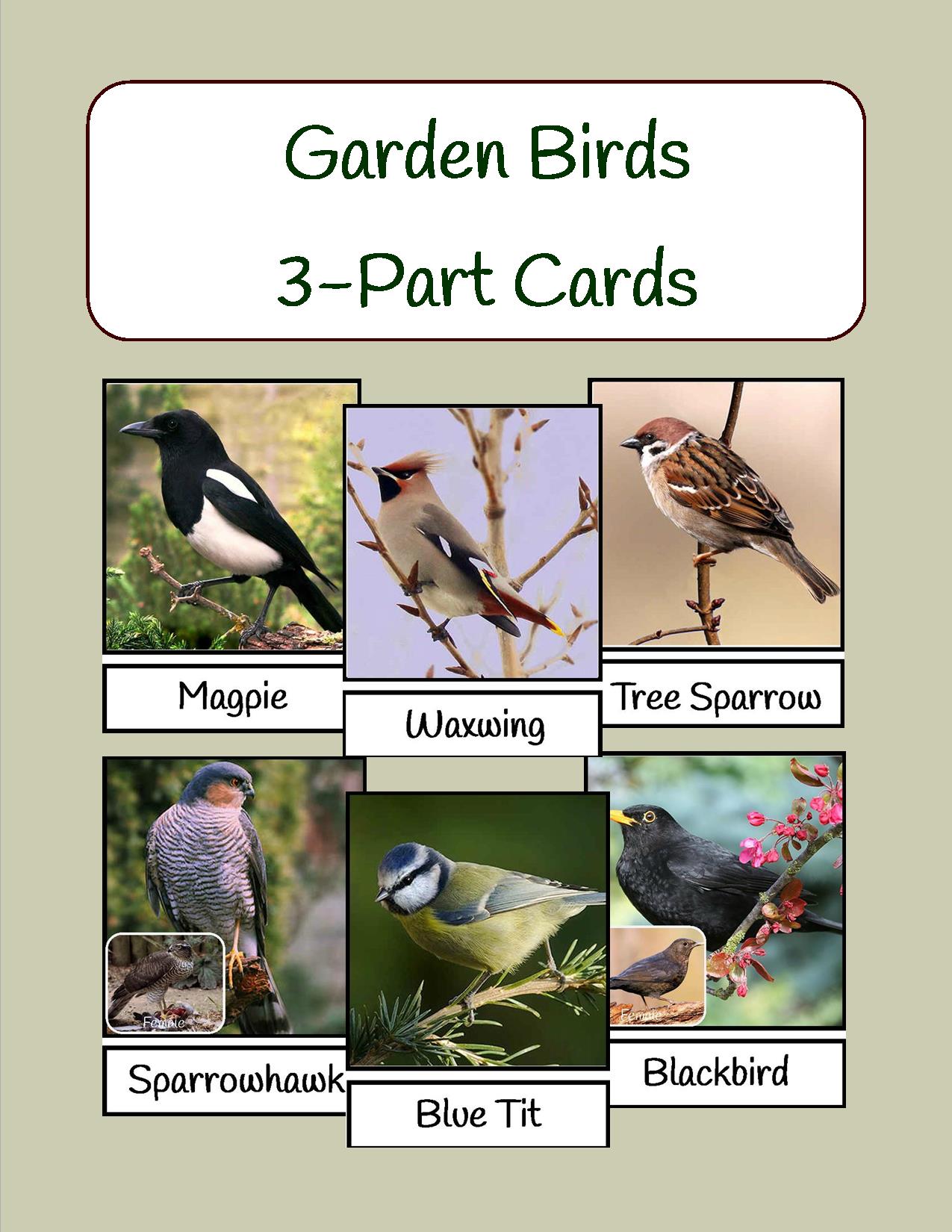 To access your copy, simply sign up for our emails and you’ll find a link and password at the bottom of the emails that will give you access to this free printable, as well as all the past subscriber freebies that we’ve done.

And if you want to encourage your little bird watcher with their new hobby (of watching the birds, not ringing them), here are some great items to get you started: