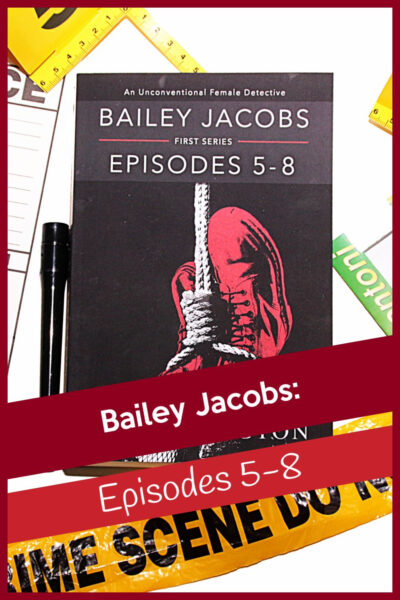 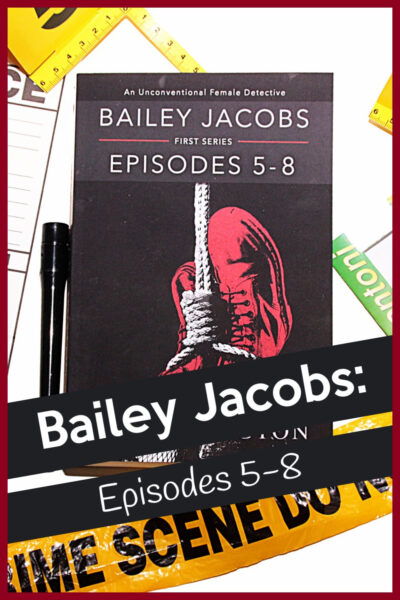 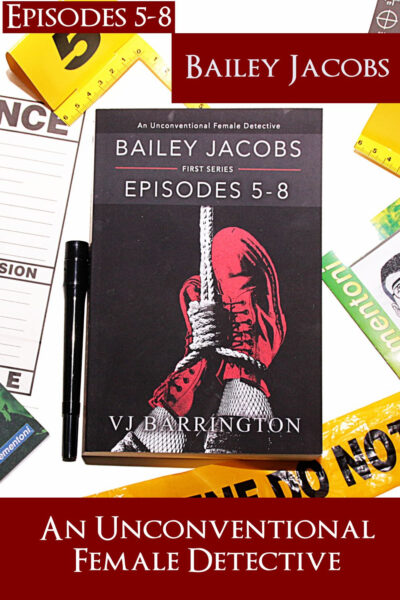 Sometimes it really amazes me how many creative people live in the small town in which we reside. Some were born and bred here, while others are ‘blow-ins’ like me. Perhaps it’s the sea air, or something in the water? Whatever it is, VJ Barrington is quickly becoming one of the most-read authors of the area, which his latest publication, Bailey Jacobs: An Unconventional Female Detective, First Series, Episodes 5-8.

Wow, that does seem like a long title, so let me explain for a quick moment in case you didn’t see our review of the first episode. The Bailey Jacobs episodes are each stand-alone novellas that can be read on their own, or be read in sequence (If you’re old enough, think about how the Bobbsey Twin books are set up, but for a young adult audience). This means you can start with any episode and get stuck right in….however, I do recommend that you start at the beginning as you’ll soon be hooked right in and want to follow along with Bailey as she plays junior detective and finds herself immersed in one shambles after another.

Everywhere Bailey goes these days, trouble and intrigue seem to find her in the most unexpected places and she finds herself playing amateur sleuth all over again.

Bailey Jacobs is 17 years old and living in Farnham, England, a usually quiet town in Surrey, but she is finding herself involved with more and mysteries, just narrowly escaping death as she hunts for clues to the Irishman.

What would you do if the newspaper was delivered to your door a day early and foretold the future? Of course, you’d think it was a joke…until the events did transpire and with each issue became ever more intense, leading up to a serious incident that featured you?

Bailey is on the case, trying to find out who is behind these malicious events, and it isn’t who you might expect.

READ MORE:   A Geek in Japan: A Great Book For Japanophiles

Bailey Jacobs and the Unsavoury Sponge

Something’s going on. The Irishman is back in the picture and Bailey’s mother is chatting away to ‘the tramp’ as if they’re old friends. Who’s Morgan, and what does the mysterious key open? Everyone is a suspect in Bailey’s eyes until proven innocent.

Bailey finds some help in the most unexpected of places and finds herself in another awkward situation as she tries to find out why she finds her boss, Smeak, so repulsive and creepy.

Someone from Bailey’s past is back in the picture and Bailey inadvertently serves up a sweet revenge that could be considered just desserts.

Bailey Jacobs and the Third Batsman

In this episode, Bailey tries to solve a death that occurs at the local cricket club when she goes to watch her new boyfriend play. She has her own theories of what went on that day, theories that differ from those of the players and the police. She’s convinced it wasn’t simply an untimely natural death, but something more sinister.

Baily Jacobs and the Missing Money

Money is going missing from the café where Bailey works. Who is responsible, and how are they doing it? Bailey calls on her friends for advice and they set up a covert operation that brings in surprising results.

Once again, not everything is at it seems. The Smeaks disappear without warning, and Bailey discovers that she was wrong about a major accusation she had earlier made.

In this shocking episode more is revealed about the Irishman and Bailey’s family than she could have imagined, all as her love life ramps up as well.

Once again we’re left hanging on the edge, with more questions than answers about Bailey and her life.

Next in the Bailey Jacobs series:

Barrington is already working on the next 4 episodes in the series, which should be ready for publication later this year. I know I can’t wait to see what close calls Bailey finds herself in…

VJ Barrington was born in Africa in 1966. Having lived and worked abroad most of his life, he has settled down with his wife and dogs in a quiet Victorian town on the Antrim Coast of Northern Ireland.

He enjoys stories with plenty of twists and turns that keep you guessing until the end. This can be seen in his writing and his preferred authors who include Jeffrey Deaver and Agatha Christie.

« Slow Cooker Meals – When & How To Plan Them
Love Crafts? We Do! Our Knitting and Cross Stitch Challenge »