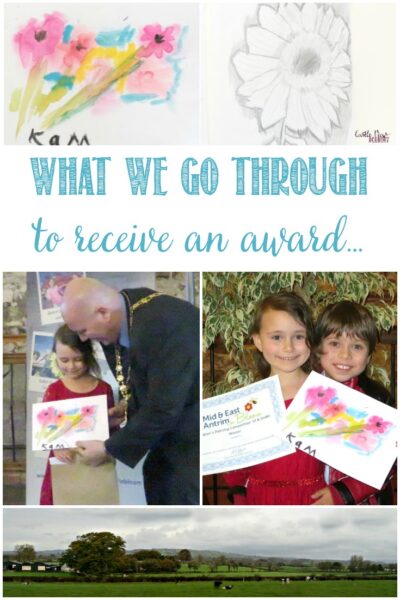 We have a winner!  And the day will be remembered for the adventure it took to get us there and back as much as the art award itself, I’m sure.  Tristan and Kallista entered into the area in bloom painting competition for the first time this year in the ten and under category.  They each choose a project they had worked on for Creating A Masterpiece that they were happy with. Tristan entered a picture of a sunflower and Kallista entered a watercolour picture of  abstract flowers. 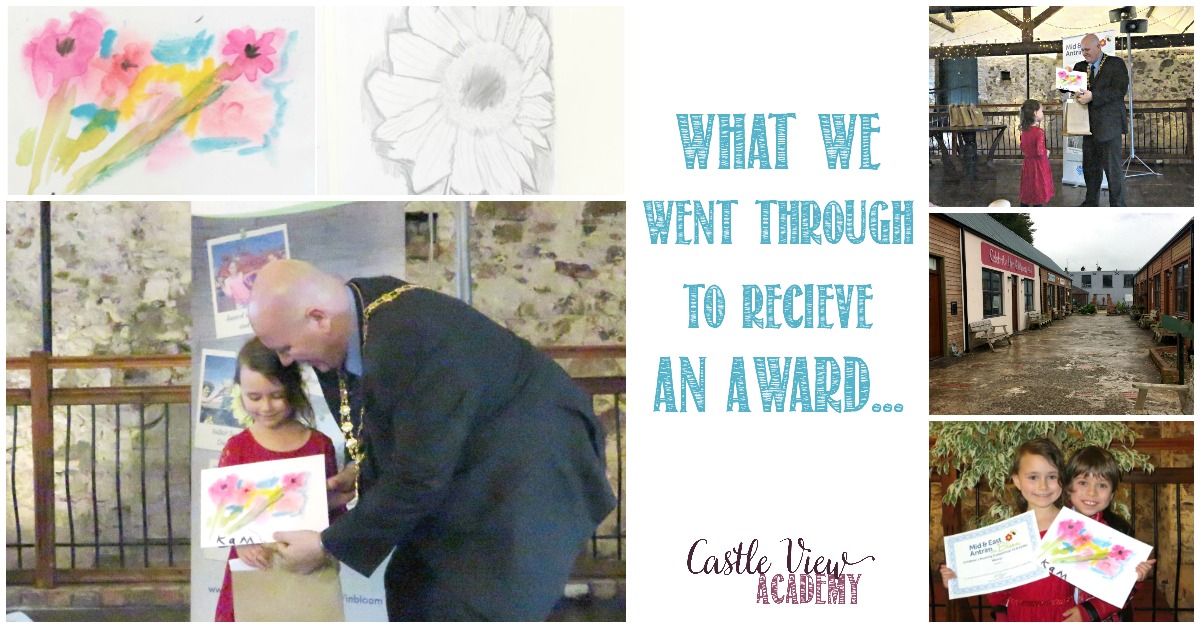 Here’s the concise version of events, as written by Kallista, herself:

I entered a competition on the 30th of September.
8-9 days later I got a letter in the post saying that I won the competition.
I was thrilled and amazed!!!!!!!!!…
(I could not believe it)

11 Day’s later we got on the train to Yorkgate, got on another train to a place called Ballymena and had a look around the shops and went to Starbucks.  Next we walked to the bus station, hopped aboard the bus to Broughshane. When we got off the bus and went to this large building. Next, we went upstairs and had a seat and settled down and people started to announce the winners’ names one by one. Finally I  was announced and I stepped up, shook hands with the mayor of that county. I took my prize and got my photograph with the mayor and sat back down and had a nibble. Once we left the place it was raining and we were soaked to the skin; we walked from Broughshane to Ballymena train station, went aboard the train and settled down to rest, and then we swapped trains at Yorkgate and then we got off at our town.

And here’s the slightly longer version:

We sent the art pieces off without any time to spare as I had forgotten all about it until I was clearing paperwork and found the entry forms. We packed them up after removing them from their art gallery in the hallway.

Then it was out of our minds as we continued on with everyday life. Until…… an envelope arrived in the post for Kallista.  She was busy so asked me to read it to her. It was a letter saying she had won the competition! She took the letter, held it high and jumped across the kitchen and back waving it around up high! She was so happy!!

As proud as I was of Kallista, I was also very proud of Tristan. Kallista had won against her big brother but he could not have been more supportive and genuinely happy for Kallista. He had a big smile plastered on his face; he was ever so joyous. He had previously had his own artwork in the gallery and it was purchased only to return to him on his birthday by Batman. So he thought this was perfectly fair and right. 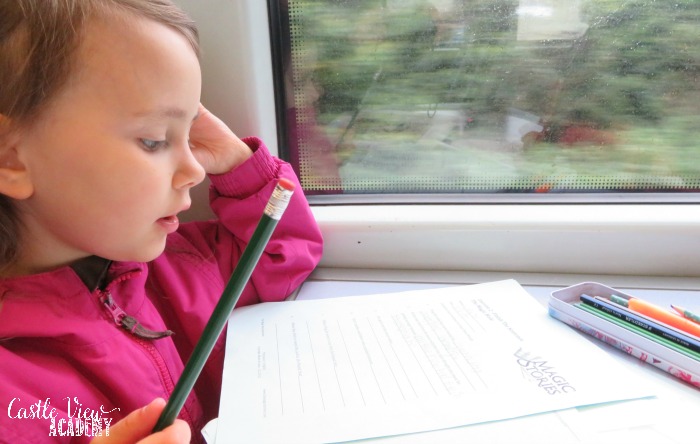 When the day arrived we took two trains and a bus to get to the ceremony, leaving almost 5 hours before it started in order to arrive on time. But we certainly couldn’t miss it. The kids had not been on the train in this area before and it had been about eight years since I was in the area myself. Adventure awaited.

Hurricane Ophelia had gone through just three days prior and this day again held a weather warning and rain advisory… But nothing would stop us!

When we arrived in Ballymena we were first on the hunt for Starbucks; after seven years I could finally collect my free drink! However, this is where our adventure began as the Starbucks map was wrong.  It was nowhere near where it was listed on the map, finally someone saw us looking confused and asked if we needed help.  She pointed us in the right direction. We made it there only for my card not to be accepted, but they kindly honoured my request and made me a delicious bespoke drink.

We made it back to the bus station with only a few minutes to spare. We took the bus to Broughshane and we still had an hour (the bus only runs once every two hours) so we wandered through the gallery and around the new buildings in the Raceview Mill which has been restored over the past four years. 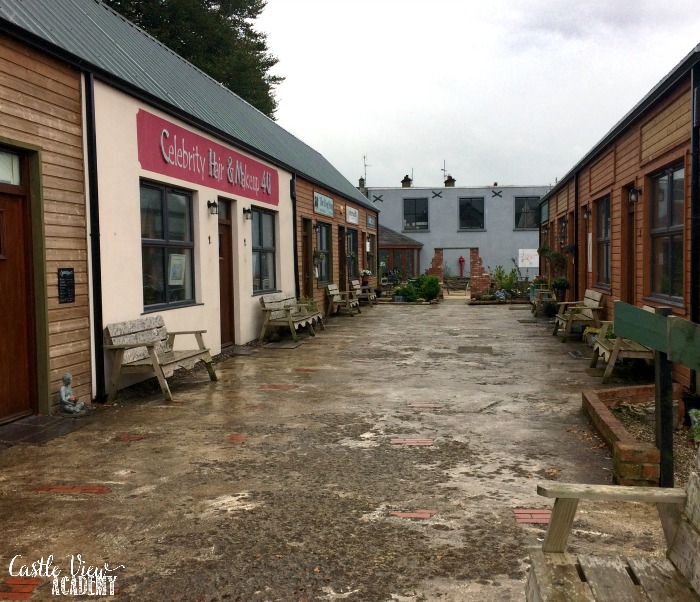 The awards were in the old Raceview Mill itself, which is a wonderfully old building of over 200 years; we went upstairs where the rafters were filled with fairy lights. We found some chairs and had to sit and wait in anticipation.

The mayor was there to present the awards to both adults and children. Other categories for children were painting for 16 and under, poetry, and the tallest sunflower. Some of the adult categories were best font garden, best container garden, best business planting, best community planing, and best planting for wildlife, etc. 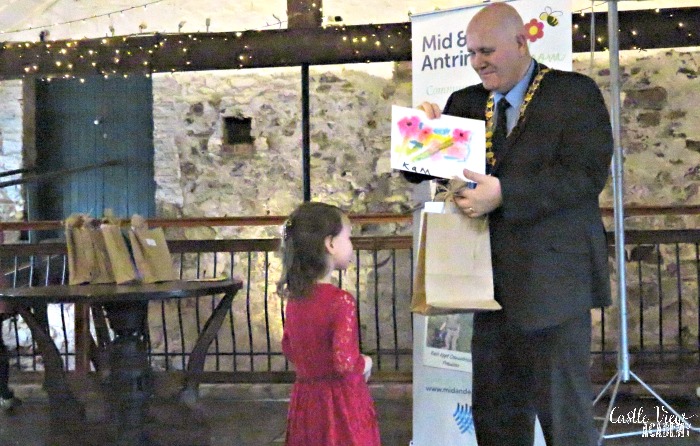 I wasn’t sure if other children would be there because it was 2 PM and most children would be at school: however, there were plenty there to accept their awards in school uniform,  with my children were the only ones not in uniform. When Kallista’s name was called, she went up to receive her prize and shake hands with the mayor. She later told me that he didn’t shake her hand too roughly, which was something she had worried about. Then she had her photo taken. 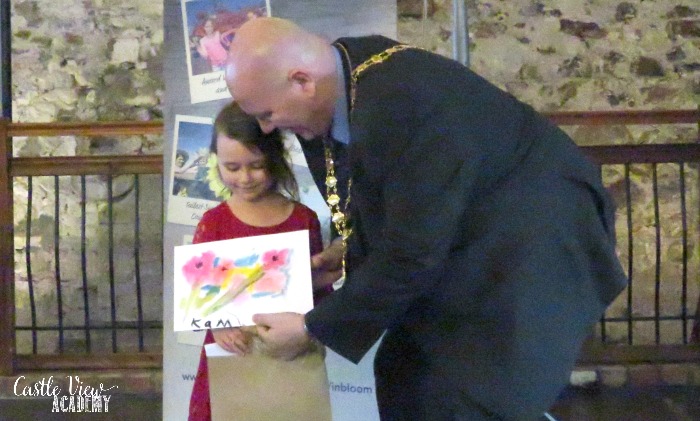 Kallista was so joyed at winning a prize which,  in the end turned out to be a £40 gift voucher, some bluebell bulbs, a lapel pin, a postcard, and the certificate. Kallista is trying to decide how she will spend her winnings; at the top of her list is a pair of winter boots. Practical gifts; fabulous! 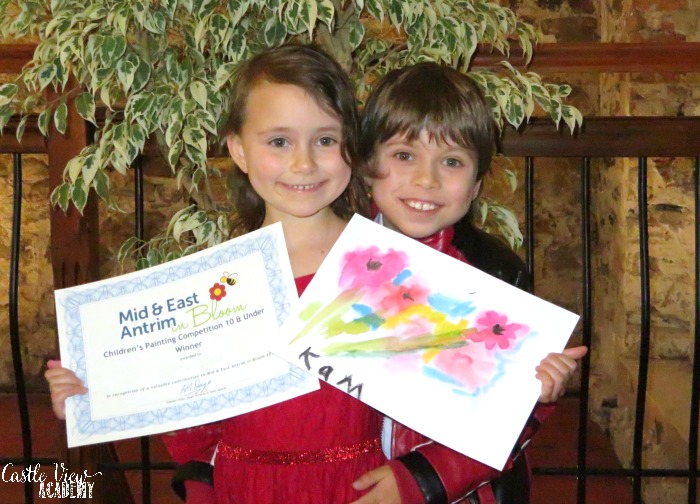 When we left the timing was good for us to catch the next bus and there was only one bus every two hours. We had previously checked the bus stop across from where we got off, but that bus stop did not list the particular bus number we needed to return to Ballymena.  So we followed the directions given online by the bus company and as it turned out, that was indeed the stop we had needed but on the website it was listed as being on a different street. With just about 50 feet to spare we saw the bus go past.

We were not impressed.

We were unsure what to do so we went to the info centre and read about the mills first. We checked with the gallery  and the cafe and found they would close an hour before the next bus arrived.

Kallista decided she wanted to walk.

The walk would be about 3 1/2 miles so we started walking back as quickly as we could before the weather set in. We did not make it very far before it started to rain. And then it started to pour down. Kallista was not very happy as we were trudged along the footpath at the side of the highway past factories, schools, and pastures, being splashed as we went. Two vehicles did offer us a ride but I declined as I did not want the children to think it was safe to take rides from strangers (and they wouldn’t have had car seats, anyway). 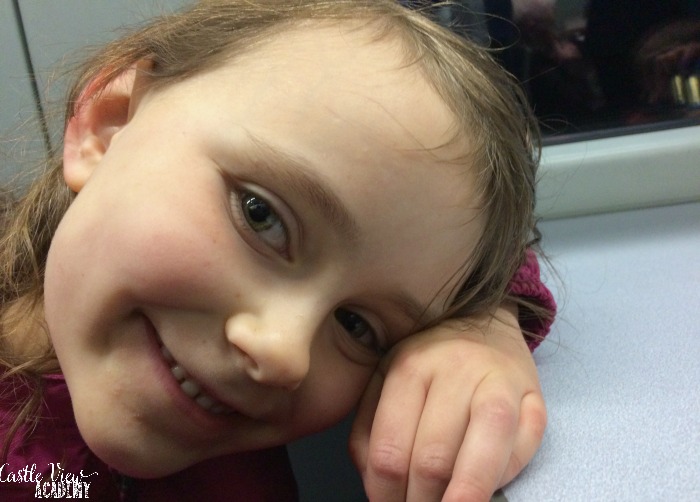 Finally, we made it almost an hour before the next bus would have arrived, which made Kallista very happy. We found the library and popped in there for a little while. Then we made our way back to the train station and had a snack before the next leg of our journey. By this point we had walked over 8 miles during the course of the day.  On the train on the way home Kallista was tired and soggy but happy.

When we arrived back in town we called Phil to come pick us up as we didn’t think our little legs would take us up the hill home.

Overall though, it was a very good day and Kallista enjoyed the experience.