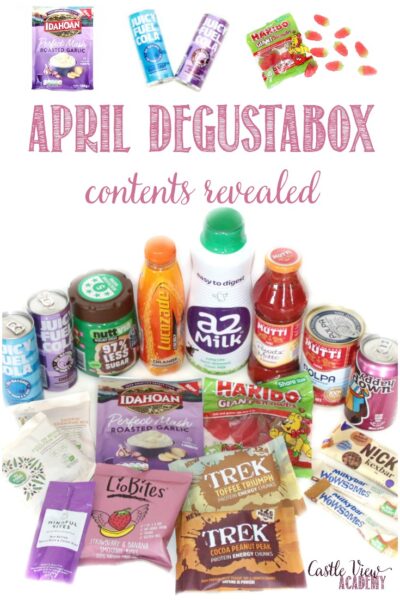 It’s a beautiful, sunny spring day today, and while Phil and the kids are out trying their first experience at a Lego club, I thought I would share with you the contents of our April Degustabox.  Many of the contents would work well for a picnic or a hike.  We enjoyed a lovely picnic last weekend under the cherry blossoms; do have any picnics or barbecues planned this week? 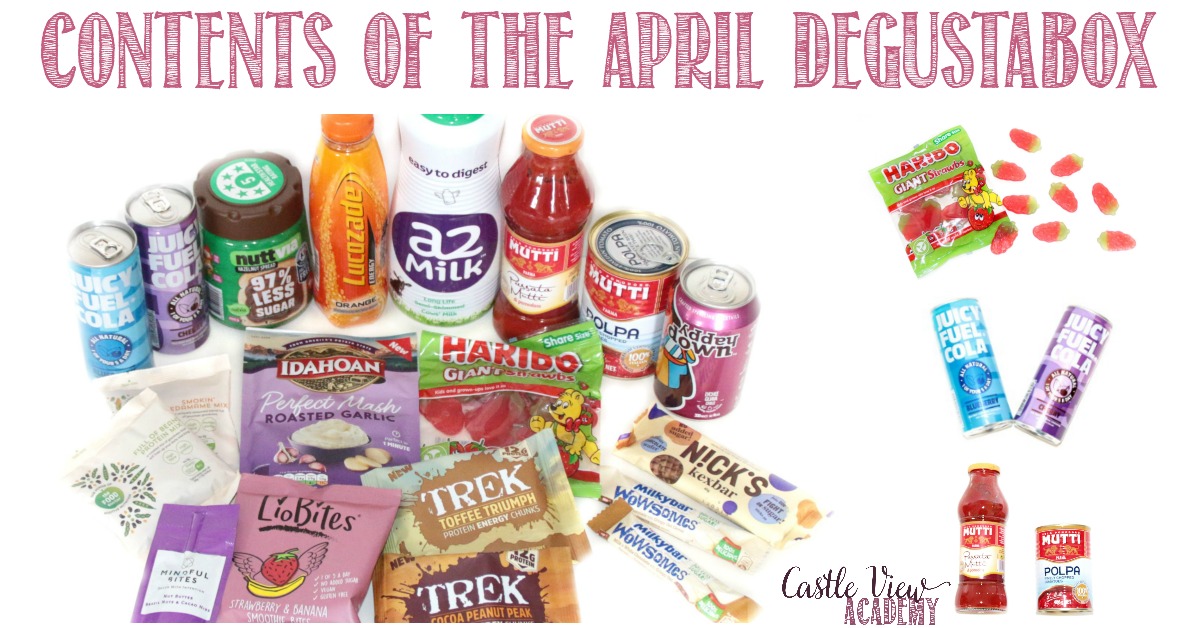 Let’s start with the contents of the April Degustabox before moving on to our top picks.  Each monthly box contains between 10-15 products; some aren’t yet available in the shops which gives you the first chance to try them out!  The short version of this month’s box is that there are 17 items; 4 beverages, 10 snacks, and 3 meal items.  The long version is…. 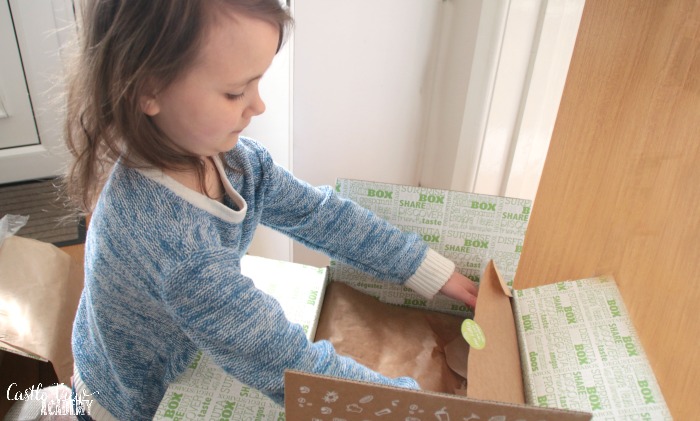 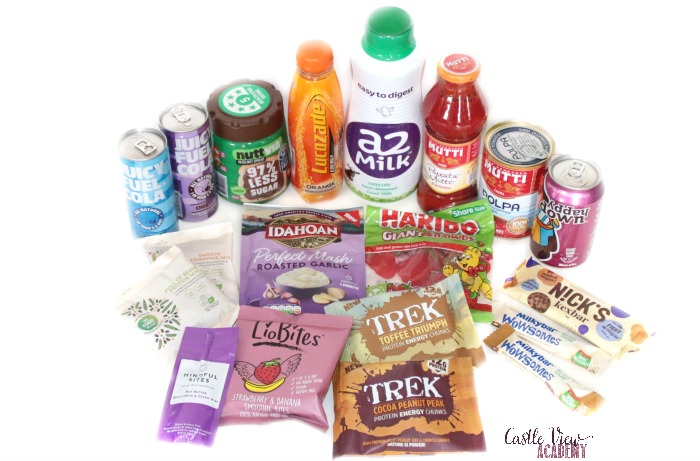 I loved to see the Idahoan’s Perfect Mash Roasted Garlic tucked inside our box this month.  Growing up in Western Canada, Idahoan brand is one I’m very familiar with as we would occasionally have Idahoan mashed potatoes in the time between the autumn’s potato harvest had been depleted and the start of the new season’s bounty. We all enjoyed this garlic mash with pork chops and veggies during the week as a quick and delicious meal when time was tight.  They have a nice, strong flavour and the texture was just right.  This is a product I’ll be looking out for the next time I do a grocery shop.

I was pleasantly surprised by the Juicy Fuel Cola; we received both blueberry and cherry flavours. I wasn’t sure what to expect; it is refreshing, there aren’t any artificial sweeteners (yeah!) and in fact, there isn’t even any added sugar in it.  With the blueberry flavour you’re hit with a burst of grape juice sweetness, followed swiftly by the tartness of blueberry and the sourness of lemon, with an undertone of cola. The cherry flavour is heavier on the cherry than it is on the cola, and is really nice.  Unfortunately, the individual cost of these cans are out of my price range, but with the sugar tax in effect (the price of a cola locally has gone up by 15-20P for 500ml), I think I would rather ditch the usual cola and save up and savour Juicy Fuel Cola as a treat. 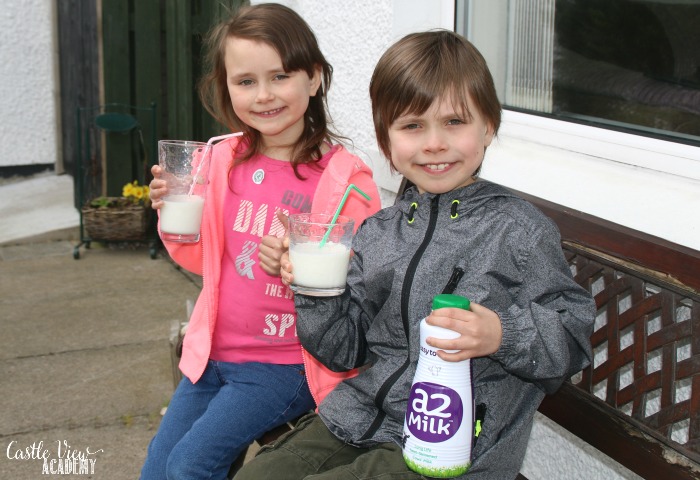 At the top of Tristan’s list was the a2 Milk Long Life Semi-Skimmed Cows’ Milk!  He has a dairy allergy and to date when he’s tried it he hasn’t shown the allergy symptoms he does with regular milk.  It does come with a disclaimer that it is not suitable for cows’ milk protein allergy, however, so be mindful of this for your own family.  Tristan is just so happy to feel a part of the clan and not separated out when he has cows’ milk as opposed to other non-dairy milk alternative products.

The kids (including Phil), were happy to see HARIBO Giant Strawbs in the box as they are a favourite with them.  Shaped like summer strawberries and their flavour is at once sweet and tart, and they are soft yet stick to the teeth.  I didn’t think I liked this, from my recollection…but somehow a bag has quickly disappeared….

The Food Doctor Full of Beans Protein Mix is a mix of broad beans, soya beans, black soya beans, peas, and corn that are light and crunchy, as well as delicious.  Tristan prefers the beans while I prefer the corn, so that works for both of us when sharing a packet. The Smokin’ Edamame Mix is similar, but with corn, edamame soya beans, and broad beans, with the added flavour of smoked Hebridean seaweed.  These little snacks remind me of some of the snacks I tried while living in Japan!  And with protein and high in fiber, that’s an added bonus.

Lucozade Energy Orange drink is a bright orange colour and reminds me of the children’s orange drink at McDonald’s when I was a kid in Canada.  I wasn’t able to drink that, however, but this was my first thought about it; the difference being this is carbonated.  I know Lucozade has been around forever, but this was the first time I have had a sip of it.  It’s not something that I would have again, but Phil enjoyed it after cycling home from work.

I couldn’t make my mind up about the N!CK’S Kexbar; it’s a chocolate covered wafer, which is one of my favourite things.  It was light and airy and not heavy.  It uses natural rather than artificial sweeteners in place of sugar, and although they’re natural, perhaps my taste buds just haven’t acquired that taste yet.  I do try to stay away from artificial sweeteners, so it is nice to see the trend of moving towards natural products.

Strawberry and Banana LioBites Smoothie Bites are interesting.  Imagine apple sauce, banana puree, strawberries, and black carrot juice concentrate all blended together into a smoothie, then poured into little moulds and freeze-dried.  That’s just the process this product has gone through.  The bites aren’t the prettiest, but they do have a lot of flavour with a punch of apple sweetness and the tang of strawberry.  They may be a complimentary topping crumbled up on top of ice cream instead of a sauce or sprinkles.

We received 2 packets of TREK Protein Energy Chunks which look like little cubes of chocolate dusted in icing sugar.  The Cocoa Peanut Peak flavour is crunchy and the peanuts are not overpowering, and the hint of cocoa comes through.  The Toffee Triumph flavour doesn’t particularly have a big toffee flavour, but you can certainly taste the dates and raisins that are in the chunks.  This flavour has cashews in it, of which you only get a slight undertone of.  Normally, I’d have preferred toffee over peanut, but not with these!  These packets have 12 grams of protein inside, and will be good to toss in the backpack for those days of hiking or long days out walking in the fresh air.

Tristan liked the toffee ones so much he snuck one after this photo was taken and two hours late he was covered in hives from head to toe.  The first time he had a couple they didn’t cause issues, but this time it was too much for him.  It was worrisome as he hasn’t had a reaction like that before, but after some heavy antihistamines he was okay again.  Although this is an isolated incident for us, I just thought I would mention it as it was part of our experience.

Mutti Passata and Mutti Finely Chopped Tomatoes made a most delicious Taco Tuesday for our family (with enough left over for Wednesday and another meal is in the freezer.  I have made beany Tacos before, but the family said this was the best-tasting batch ever!  The chopped tomatoes were very fine and small, which is great for those who don’t like big tomato pieces in their soups and stews.

We haven’t yet tried the Mindful Bites Squeeze Sachets as Phil will be taking them to work with him this week.  I must say that I haven’t heard of squeezy nut butter sachets; I would be inclined to put them on some toast or crackers, or maybe even add them into a banana smoothie or atop ice cream….hmm…these packets may not make it to work….

HappyDown Craft Cocktail is a carbonated drink with 4%alcohol.  Our flavour was Lychee, Guava and Chilli, which made for an interesting combination.  It’s sweet, sharp, and warming all at once.  Phil in particular, liked the surprise touch of warmth on the palate after swallowing a sip.  Keep this one in mind for Father’s Day!

Nuttvia Hazelnut Spread is what I’m trying out right now on a rice cake.  It’s a thinner consistency than I was expecting, and it doesn’t have a strong aroma of either chocolate or hazelnuts and the flavour is light as well, though it does stick to the roof of my mouth almost as much as peanut butter (but not quite).  It does have 97% less sugar than other brands, but that sugar has been replaced by a few sweeteners (Natvia being one) which does impact the flavour, unfortunately, as they do have a different taste. However, this would probably be a good choice for someone has diabetes and should stay away from sugar itself. 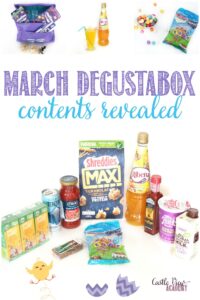 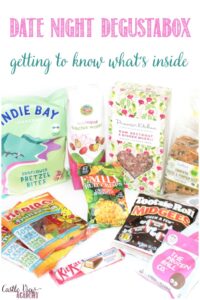 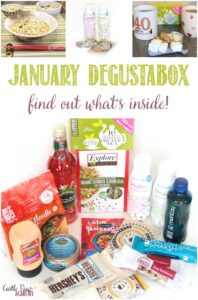