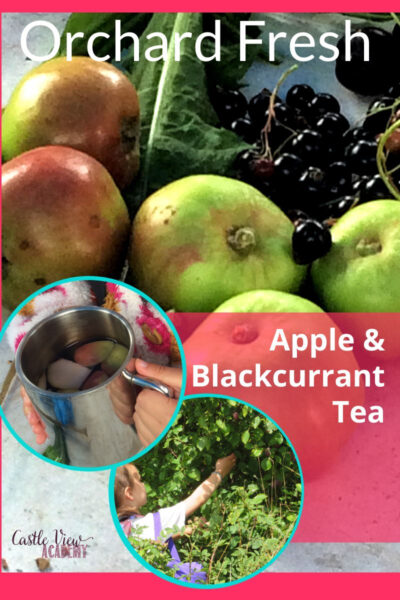 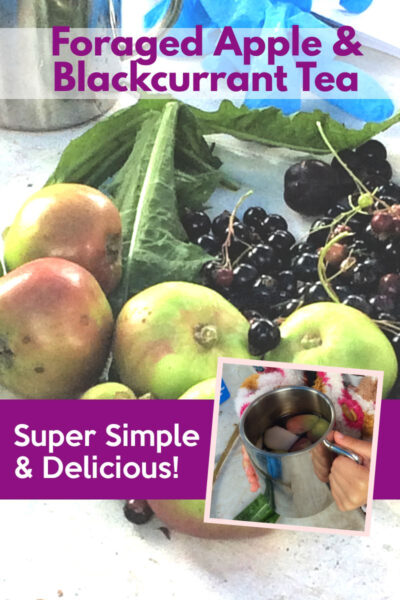 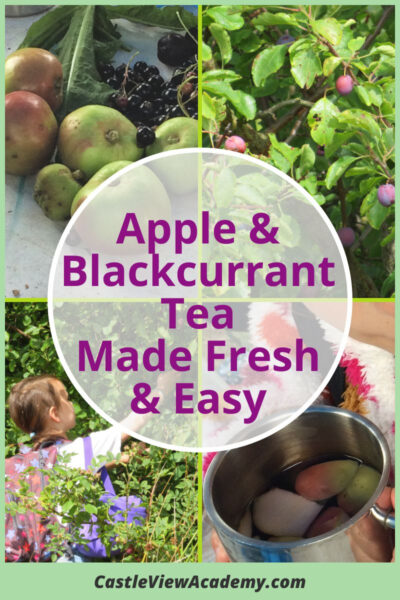 Last year I wrote about my children attending the Biodiversity Summer School, and I mentioned that they love to make foraged tea with the fruit they find in the community orchard.  Making this apple and blackcurrant tea is super easy and they thought you might like how to make it, too!

One day of the Biodiversity Summer School for the past couple of years has had a day where the kids learn how to build shelters and go foraging.

The kids went into the still small orchard (it was planted about 8 years ago), and picked native Irish apples, blackcurrants, plums, and then brought them back where there was some hot water waiting in large thermoses.

Last year Chris was quite funny and to make things more interesting for the children, he and his team “created” banana ‘trees’ and pineapple ‘bushes’ by hanging bananas from the trees and placing pineapples amongst the large plants on the ground.  It was hilarious!  Unfortunately, the wasps were bad last year and a couple of kids and adults were bitten by them, but they were brave and continued on foraging and having fun.

Apple and Blackcurrant Tea Is A Treat

The kids poured some hot water into mugs and then added the fruit to it; sliced apples and plums and then they simply squashed the black currants and dropped them into the hot water and gave it a stir and let it steep.  If you do not want any fruit in the bottom then you can remove the fruit if it’s troublesome for you, or a choking hazard for young children; you can eat the fruit as it is.  Or if you would rather leave the fruit in to continue to add flavour to your apple and blackcurrant tea then you can do that, too, and eat it after your tea is done.

Stinging nettle is a common weed that you can find most anywhere here in Northern Ireland, and there are some possible health and medicinal benefits to having it, and Tristan likes to feel brave and pluck the small tender new leaves from a plant and crush them roughly before either having a little bitter sample of it raw as it is or dropping it into his mug of tea.

Here, he’s wearing kitchen gloves, but if you’re rough with the nettle, you don’t need them as you’ll break the little prickly parts. And if you do get stung, there is usually dock leaf growing nearby, which if rubbed on the nettle rash will relieve the aggravation, and it’s not just an old-wives tale, it really does work!

Kallista and I aren’t as big of fans as Tristan, but there really isn’t much that he doesn’t like as far as food goes (not that you can tell by these photos)!

The children love to pick an extra apple, plum, pear, or a few berries to bring home with them just to use for an afternoon tea while taking a break from school.  You can’t get more natural and wholesome than picking your own fruit and making your own hot, fresh, tea!  No artificial flavours, sweeteners, or anything you don’t want in there (just be sure to wash your fruit first).

Have you made a foraged tea before?  What’s your favourite flavour?  Let us know in the comments below!

Note: children should be supervised by a knowledgeable adult while foraging so that they don’t pick or eat anything that could be harmful to them.

Previous Post: « Self-Publishing from the Very, Very Beginning
Next Post: 15 Ideas For A Fun And Frugal Summer »