Last weekend we had our first camping experience as a family!  We didn’t go very far, or for very long, but it was very educational for all of us. 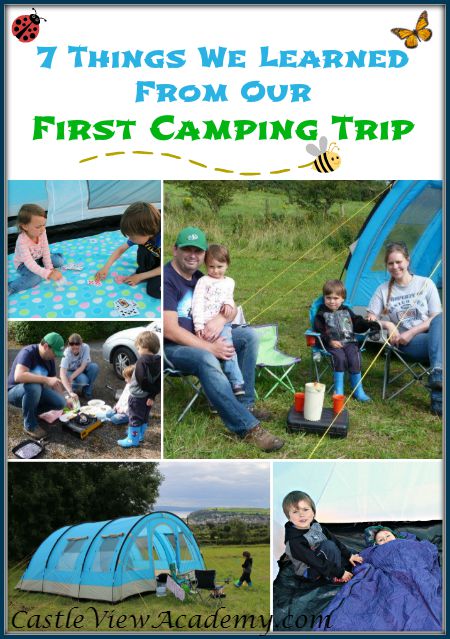 When we were given the opportunity to review the Helsinki tent by Skandika, I was a little anxious as I’m not a ‘camper.’  Sure, I camped with the Girl Guides, and I enjoyed parts of it, but there were also things I didn’t enjoy.  Like the mosquitos, the threat of bears, and dealing with my allergies and asthma.  However, Phil and the children have been talking of camping the past couple of years (the kids love indoor camping)…so I put my feelings aside in the name of family love (and I’m glad I did).

I was able to put aside some of my fears:  there aren’t mosquitos in Northern Ireland (there are midgies, but not on this occassion!).  Nope, bears don’t roam the island and I hadn’t heard of one making an escape from the zoo, so we were safe there.  And my allergies aren’t as severe over here on the Emerald Isle and I now have an inhaler if the asthma acts up.  So I was good to go! 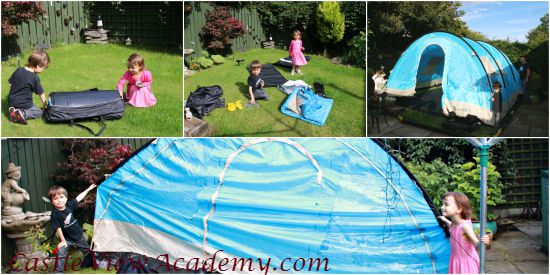 When the tent arrived from Germany, we were so excited and the children and I tried to set it up in our back garden…but it was just too spacious!  We did give it a good try before Phil came home from work.  He didn’t know the tent was on the way, so it was a complete surprise for him (You should have seen his face as he ran outside)!  Now he was able to help so we could could get a better look at it.  The instructions say to set it up fully before your first trip.  We couldn’t quite, but we had the basics down.

Our camping expedition was planned very quickly.  The weather had been bad for weeks.  Then the sun poked out one morning and we decided that this was the day….let’s grab our things and go, go, go! 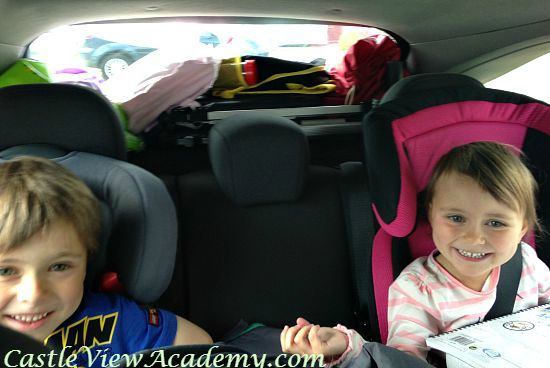 Phil had already borrowed a couple of sleeping bags from his dad which were still in the car, so we gathered up some supplies, packed everything into the car, and set off.  I think our car-packing might have to be better thought-out next time…I’m sure we have the kids in this vehicle somewhere?! 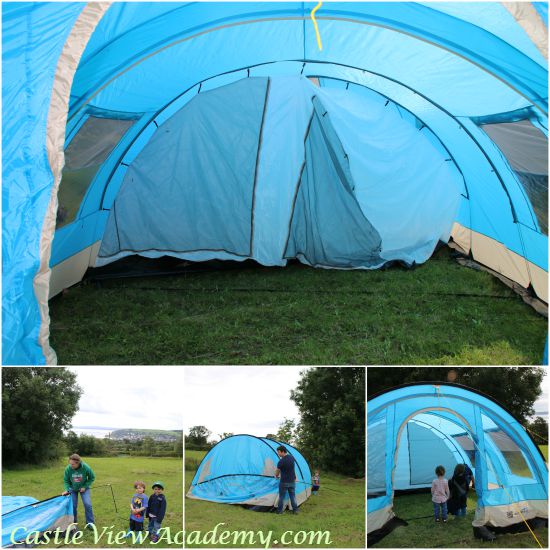 Our new 6-man Helsinki tent took us just under 2 hours to fully set up.  But this was the first time we had it fully constructed.  Next time it will be much speedier!  Phil and I maneauverd the poles into place, and the children brought us pegs when we needed them.  They also counted them at the start, and again at the end to make sure we didn’t leave any behind.

The instruction leaflet could have been a little more descriptive and have had a couple of extra pictures, but once you get it up it makes sense and we won’t need the directions next time (but me being me, I’ll have them with us, just in case).

First you set up the outer frame.  At 18kg (for the whole tent), you know those poles are sturdy and won’t let you down.  The guy ropes have an easy-to-use slider for adjusting the slack.  Then you lay the tarps (yep, we missed this step, but fixed it up later).

Next you take in the ‘bedroom’ (it’s a little tent of its own) and hook it into the toggles (you can see I have it 1/2 installed in the main photo above).  It’s super-easy!  The bedroom is completely self-contained and has its own zips and netting so keep out any and all insects.  There’s also a privacy screen that can separate the sleeping area in two.  Each side also has its own entrance.  On each end of the bedroom are built-in pockets so you won’t lose your flashlight in the night. 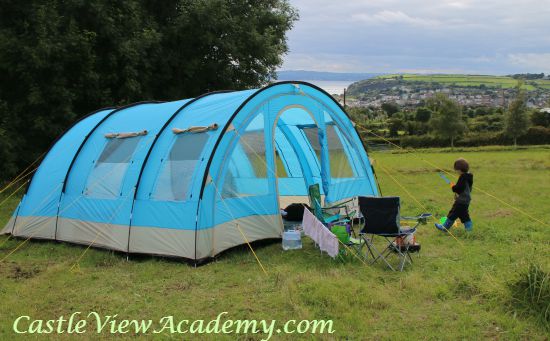 This tent is sooo spacious, and it’s tall enough for us adults to stand up comfortably.  No more bending over or crawling through on your knees!  We put a picnic mat down as our ‘living room’, and had loads of space left for our gear.  If you had a small table and chairs, you could set those up in here.

READ MORE:   Hidden Sugar: 5 Ways To Become Savvy About It

There’s another mesh pocket you can attach to the outside wall to hold those necessities such as tissues and flashlights.  And speaking of light, there’s a place you can hang a larger lantern from in the centre of the tent.  So very useful!

The bottom half of the windows are plastic to keep out the rain, and the top half are mesh for ventilation.  If it rains you can tie them out away from the tent with guy lines to allow fresh air, but not rain into the tent (these extra ropes weren’t included, but a trip to the £1 store sorted this).  The bedroom has its own mesh ventilation flap.  The front door has both mesh and nylon closures.  A patch kit is included’just in case’. 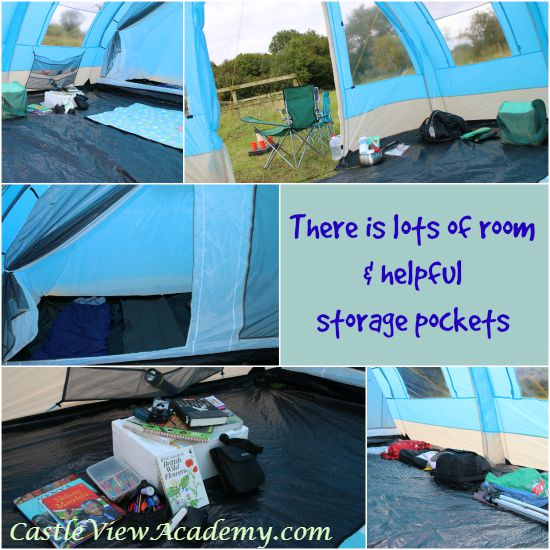 In poor weather you can unzip the front entrance and move it back so that you will still have an indoor area of the tent to relax, as well as a canopied area to set up your grill out of the rain.  What a neat feature! 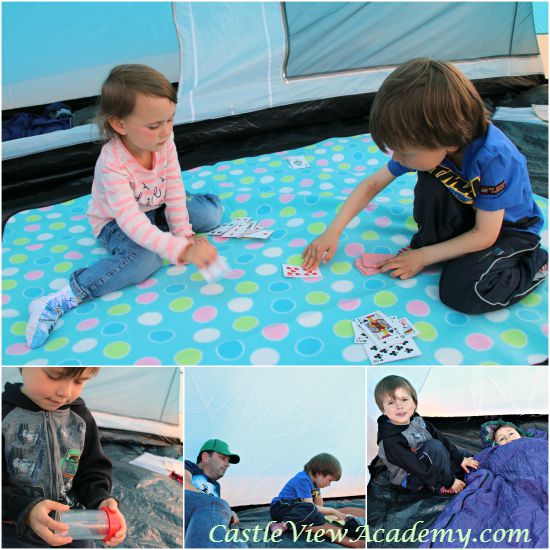 Our weather was fine, but we spent some time inside bonding with each other and the tent.  Card games, capturing and identifying butterflies that had found their way in, reading, and even sleeping comfortably, are all fun for the children! 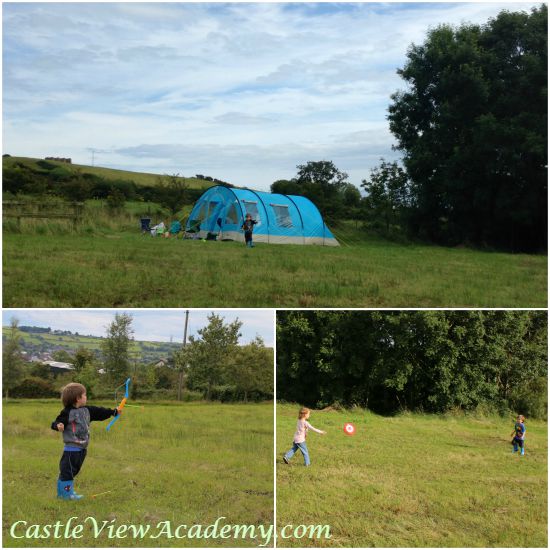 And of course, the children spent time outside playing, too.  With so much space, they could really run around and have a lot of fun!  And time just spent sitting and enjoying the beauty of nature was also had. 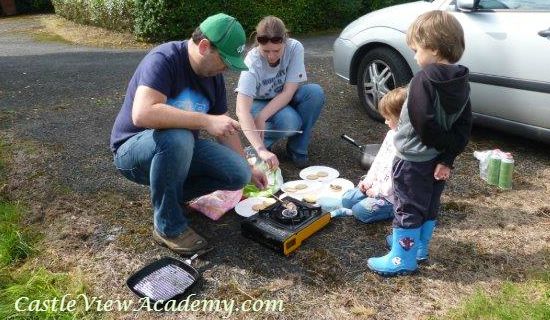 No camping experience is complete with out s’mores!  I don’t know what we’d have done if we didn’t have the ingredients in the cupboard.  Chaos would certainly have ensued!

What did we learn from our first camping experience?

READ MORE:   Discovering C.S. Lewis Square in Belfast (The Lion, the Witch and the Wardrobe) 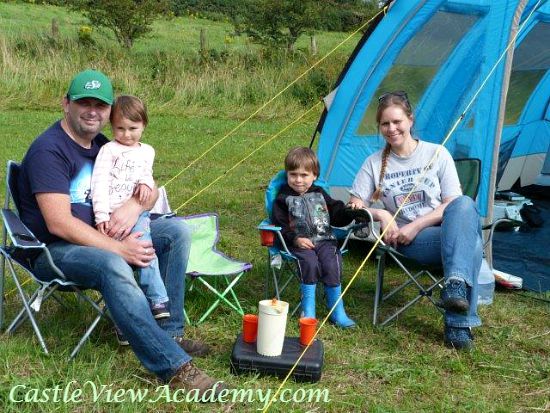 We all had a very enjoyable time, and the ideas of where we can go and what we can do are quickly filling up my notebook!  The Helsinki is very well constructed, and I love all the little ‘extras’ they’ve thought of.  My thoughts of camping are much higher now, and we’re all looking forward to many more excursions in the future!

When was the last time you went camping with your family?  Where did you go, what did you do?  I’m keen to get as much advice as I can before we go out again.  (And yes, I’ll be sharing those experiences with you as well).  Let’s chat about it over the ‘campfire’ below in the comments.

If you’d like to know more or would like to follow Skandika, you can connect with them through their website, and Facebook.  Skandika Outdoor are a European camping brand that specialise in selling quality tents and camping products online. They offer a large range of tents varying in size from 2-12 berths. Additionally camping products such as sleeping bags, chairs and tables are part of the exciting range. The direct to consumer online model allows for very competitive prices without sacrificing on quality.