A new tradition is taking the kids blogging world by storm this year!  Have you heard about it yet??

Today is World Frog Day, but… 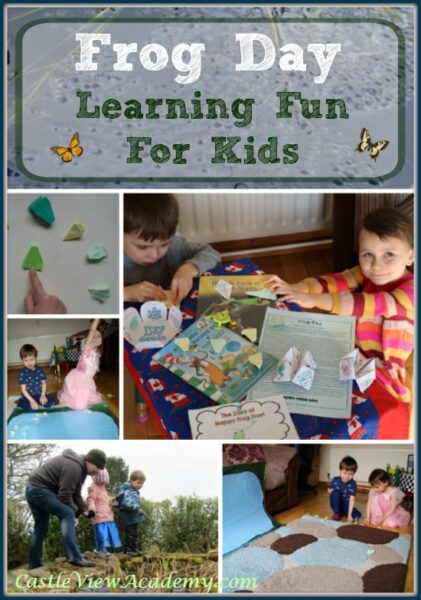 Carolyn of The Wise Owl Factory has been taking a writing class and another member shared a story about when she was growing up.  She loved frogs and wondered why there was a groundhog day but not a frog day?  Her mother and grandfather conspired and that April 1st she received cards in the mail to celebrate the day.  Thus the tradition began!

Carolyn found Lois’ story inspiring and has put into a PDF which you can download here.  She’s also created some of her fun and educational printables to go along with the story of Frog Day.  You can get a free sampler on her Wise Owl Factory website.  We’ve seen the pack and there are hours of fun activities for both individual and classroom work.

When Carolyn shared the story with me and asked if we’d like to join in on the fun, we just knew that we HAD to!  We could relate to the story.  The author of Frog Day is Lois Caswell (and my mom’s name is Lois).  And Mom’s favourite animal is…

The front room of our home was filled with frogs when I was young.  So the kids and I set to work thinking up ideas.  We hope you enjoy them.

And you know my children like frogs as well! Last weekend we took a walk to a friend’s pond to see the frog spawn that was there.  Yep, there’s a lot of it this year! 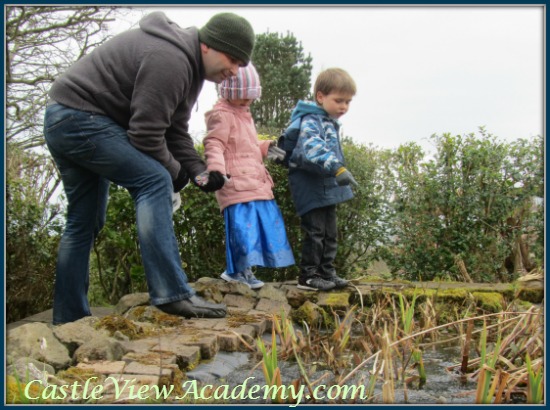 Previously we’ve shared how the children collected the frog eggs, took them home and watched them grow into tadpoles, froglets, and eventually frogs.  This is the third year that they will watch the wonders of nature.  I’m not sure they’ll ever grow tired of it!

They’ve also made a cute egg carton frog that was inspired by the book, We’re Roaming in The Rainforest, which is still sitting perched on the books in our front room.

To get in the froggy mind-set we visited the library to look for some frog books.  The children chose Would You Rather Be A Tadpole? as well as The Life Cycle of Amphibians. 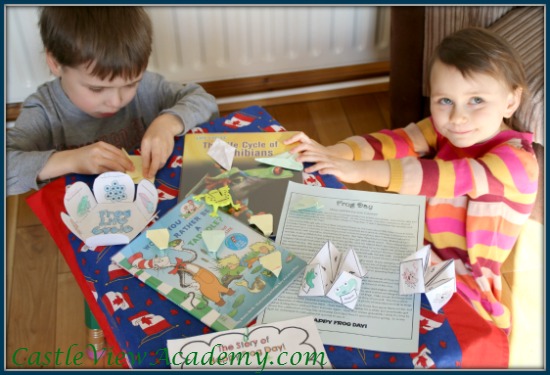 The first activity that the children did this year was to make a cute little origami frog.  Well…actually they each made 5 of them!

They aren’t difficult, and Kallista was the first to catch on and after the first one she could remember how to fold the rest on her own!  If you’d like to know how these were made, just watch this short video I made to help.  As you will see, the smaller frogs made from squares of printer-paper actually worked better for hopping!

Origami is a traditional Japanese craft, and can be considered a lesson in math!  Excellent!

Our second activity was to bring out the “pond” that Tristan made a couple of years ago to fish from.  It made a nice scene from which the kids played tic-tac-toe with their origami frogs.  They drew the grids right on the pond and used the frogs as game pieces (they had each made their frogs in different colours).  Kallista won this round! 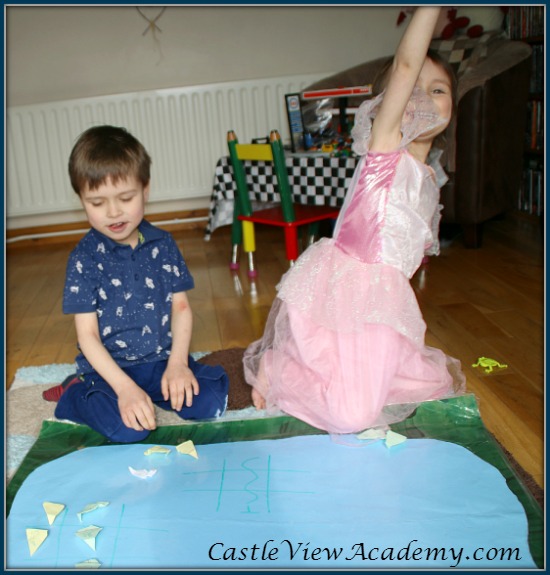 The third activity they did in two ways.  The first way they played was to use their pond.  I drew some wavy lines across it with a dry-erase marker (perhaps I should have used a darker colour so that it would show up better in the photos).  Then the children made their frogs ‘jump’ and they received points based on how far the frogs hopped. 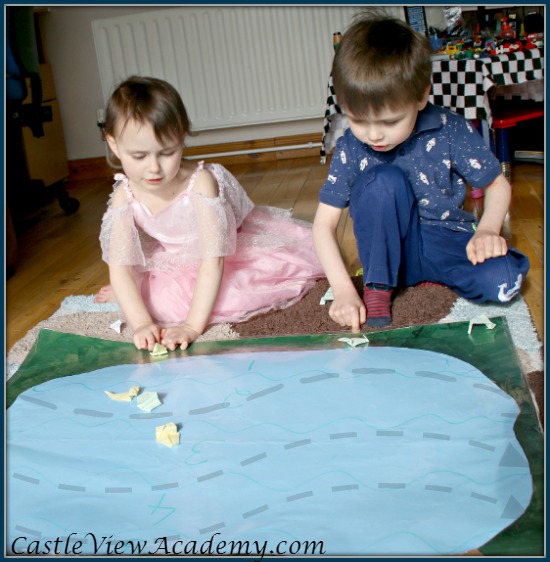 The second way the children played this hopping game was to use our rug.  Each colour of the rug was assigned a different number of points.  The children took turns making their frogs leap and then tallied up their points.  For their first try we used easy numbers, but you can use larger numbers, or even negative points to add more excitement.  That pond also makes a great white board! 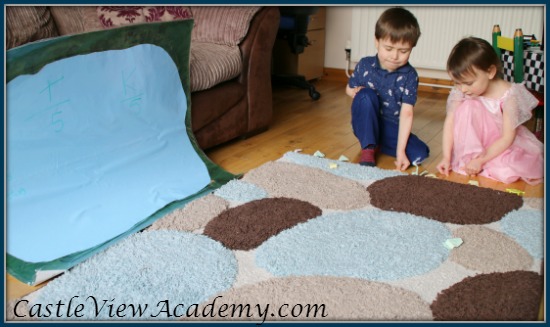 Did I mention that the children have been learning some froggy facts by using The Wise Owl Factory’s packs?  Her Happy Frog’s Day card went in the mail over the pond long ago.  I’m sure Mom and Dad will love them!  At the bottom of her post, you’ll also find many more frog-themed activities from the Kid Blogger Network.

From her larger pack on Teacher’s Notebook, they’ve had so much fun and now are almost at the point of torturing us parents with the frog facts cootie catchers!  Tristan remembers using one before, but it’s a whole new experience for Kallista! 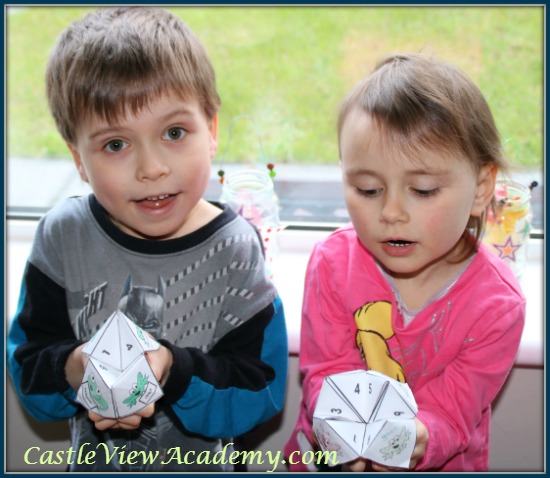 Tristan has read the story on his own and has answered the question sheet about it. And both children have been using the addition and subtraction sheets that are included.  Up next will be the word problems with extra funnies thrown in!

We were in Belfast Saturday and had some down-time between the shops closing and a family birthday celebration so we relaxed in a coffee shop.  The children had brought along their Frog’s Day colouring books and happily spent their time with them.  This week they completed the activities for those books.

For a surprise tomorrow, we’ll be reading Carolyn’s own story about a frog family that has been saving up to move to a bigger location with better schools!  The children will learn about the process of moving house, as well as the terminology that goes along with it.  I read it to Phil last week and we were both giggling away at the amusing story that is well-written, informative, and imaginative all in one.  And the graphics by Teacher’s Clipart suits perfectly.  Carolyn should be writing children’s books, they’d be best-sellers!

How will you be celebrating Happy Frog’s Day this year?