You may be familiar with Jules Verne’s 20,000 Thousand Leagues Under the Sea, or it may be new to you, as it was to us. A ship is called out into the Atlantic Ocean to look for a gigantic narwhal that’s been reported and has caused unusual damage to a couple of ships. Alas, it is a submarine unlike any other and Professor Aronnax and his associates are captured by Captain Nemo and taken 20,000 leagues around the earth. 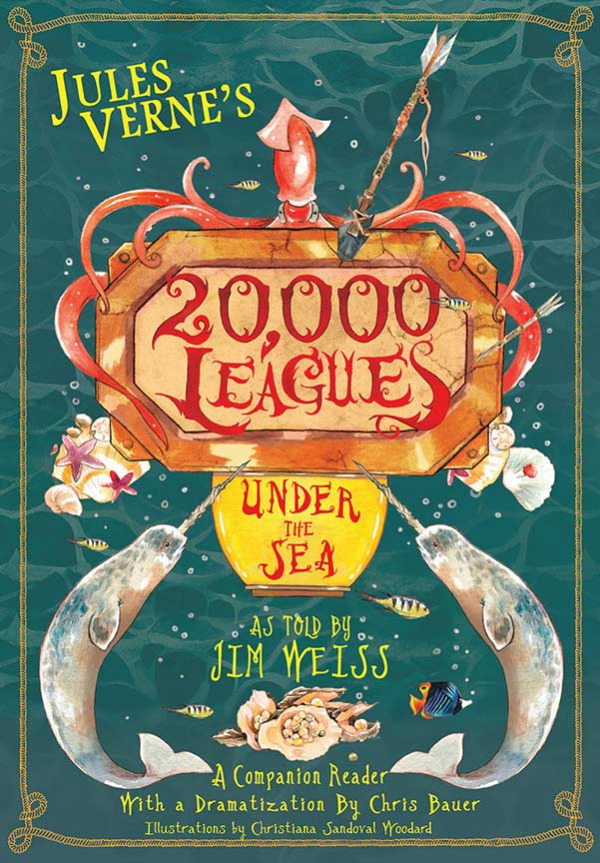 We received the digital download of this product which included a PDF and 15 audio files. The PDF contained the exact transcript of Jim Weiss’ storytelling version of Jules Verne’s Twenty Thousand Leagues Under the Sea. After this is included a condensed version put together by Chris Bauer into the form of a stage script. The audio files are divided to help children know where they are in the story (each file corresponds with a mark in the PDF noting the file number).

To begin with, my children of eight and six years of age sat up at the PC and listened to the audio files while reading along with the word-for-word PDF transcript. They listened to roughly an audio file per day. For the next two weeks my eldest listened to the transcript and read the story aloud as well.

Now that the story had been read and digested, it was onto the radio play. Chris Bauer’s adaptation of it has been done quite well. Before the play begins he explains all of the different parts if it from how to know when a character is speaking, to how to make some of the sound effects. This was a good introduction for my children who had not done something like this previously.

Our family gathered together and we were each allotted characters to read for the radio play. I’m not sure who had more fun making up sound effects; my son or  my husband! We practised a few pages at a time when we were all together. It was a new experience for our children and it took them a little while to get used to taking on the multiple roles (there are eleven roles) and using different voices for each of them.

Although I’d pictured us ultimately recording our play as a gift for my parents, it wasn’t to be at this time. Our version was more of a staged reading. My youngest was just a little too young yet for this story as she found it difficult to read aloud during the radio play and became a little frustrated. She was happy to listen to the story on the audio and did try her best as she really wanted to participate.

My eldest enjoyed the story much more and later borrowed 20,000 Leagues Under The Sea from the library after we had moved on from this project and he was somewhat disappointed that it wasn’t exactly the same version! He’s now looking forward to creating a submarine from a huge box that we have. And his little sister wants to help draw some fish for some added ambience.

This was an interesting project to undertake and one that the whole family could participate in. Although it didn’t go quite as smoothly as planned, it went well enough that we’ll revisit it again in another two or three years when my youngest can fully participate in it. We’ll craft a new submarine box and aim for a stage play after we work through the radio play.

20,000 Leagues Under the Sea Companion Reader is available through Well-Trained Mind Press.